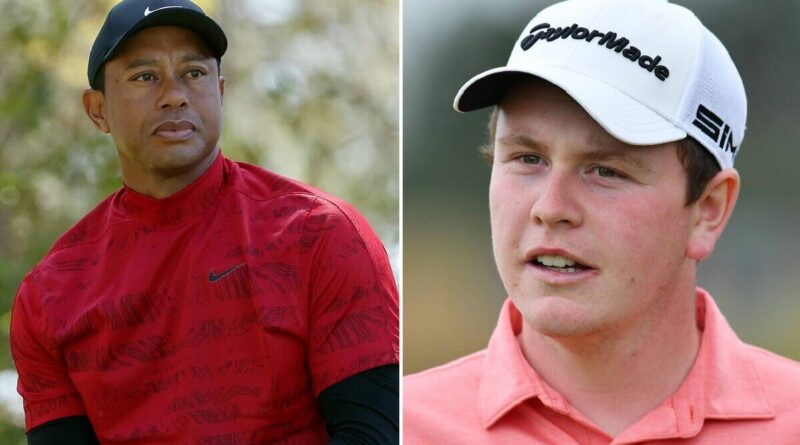 Tiger Woods will be the biggest draw at this week’s US PGA Championship – for his fellow competitors as well as the fans at Southern Hills. Woods hesitated before committing to playing in the season’s second Major after completing a painful comeback from the car crash that left him with serious leg injuries at the Masters last month.

But his confirmed presence in Oklahoma makes him the hottest ticket in the draw. Scot Bob McIntyre had a near-miss in Augusta having played in the group ahead of Woods in the third round and is dreaming of being paired with the 15-time Major champion.

“Tiger is the only man that I will be in awe of playing with but I want to play with him. Growing up he was the best I’ve ever seen. If I get the chance it’ll be something I’ll never forget,” said McIntyre.

“How do you prepare for it? I’ve thought about it. I thought I was getting him at the Masters on Saturday. The hardest thing is the crowd. When he holes out they disappear. They run everywhere.  That’s the difficult part.

“Just with him playing at Augusta, the attention on the event was unbelievable. It was wild. I stood on the putting green on the Monday or Tuesday and it was like a herd coming. You could hear the rumble. It was totally different.”

Having staked out the course where he won the 2007 US PGA a fortnight ago, Woods jetted into Tulsa on Sunday to begin his preparations in earnest. After making the cut at the Masters only to suffer his worst weekend at the tournament, he believes he will have more staying power at what will be his first event since. “I’ve got a lot stronger since the Masters. Everything is better,” said Woods. “I’m not going to play that much going forward so any time I do play it’s going to be fun to compete.”

Bryson DeChambeau is also set to make his first appearance since the Masters at the USPGA after undergoing hand surgery. The big-hitting American was expected to be out for up to eight weeks but is poised to tee it up just five weeks after the operation.

Englishman Richard Bland meanwhile admits his head is in a whirl ahead of his US PGA Championship debut this week at the ripe old age of 49. There may be no Phil Mickelson in Tulsa to defend his title but old gold is still represented in the field courtesy of Bland, who became the oldest first-time winner in European Tour history last year at the British Masters.

He will add another remarkable late-blooming first with his tilt at the Wanamaker Trophy at Southern Hills on Thursday having qualified through breaking into the world’s top 100 but the doors that are belatedly opening for Bland in the autumn of what had previously been a journeyman European Tour bring complications.

“It’s hard to get a schedule and that’s something I’ve never had to deal with before because when you’re 250th in the world, it doesn’t matter. It’s a case of ‘this is where you’re going to play,’” he said.

“At the minute I’m sort of hanging around the world’s top 50. If I can be in the top 50 after the USPGA, I think there’s a possibility of playing at the Memorial, Jack Nicklaus’s tournament, which would be very, very special and then it’s top 60 after the PGA gets into the US Open.

“A lot depends on my world ranking but it’s a nice problem to have. When you lose your card at the age of 46, a lot of people are writing you off and so to come back the way that I’ve come back, when I finish playing, whenever that will be, that will probably be something I’m most proud of.”

Tiger: ‘Been gearing up for’ PGA Championship