Golfing legend Tiger Woods has been pictured applying ‘significant weight’ to his surgically-repaired leg after he made a trip to Los Angeles this week. Woods was hospitalised in February after suffering severe leg injuries in a car accident in Los Angeles.

The 15-time major winner was in the area to host the annual Genesis Invitational event at the Riviera Country Club, but was unable to participate due to an ongoing back issue.

Following the accident, the all-time leading PGA Tour winner suffered ‘open fractures affecting the upper and lower of the tibia and fibula bones’ meaning extensive surgery was needed to ensure the 45-year-old could operate his right leg properly again.

As a result, Woods has been rarely seen in public since, however appeared outside a Beverly Hills hotel this week on crutches and applying pressure to the leg he had received extensive surgery on.

The images provide yet another positive update for golf fans around the world on the 45-year-old’s improvements, after former Ryder Cup teammate Rickie Fowler gave an optimistic update on Woods’ rehabilitation last week.

JUST IN: Team GB’s Paul Casey sits just four shots back after Olympic golf round one is suspended

Speaking ahead of the 3M Open in Minneapolis, five-time PGA Tour winner Fowler confirmed the 2019 Masters champion was working hard in his rehabilitation.

Fowler said: “I know he’s been getting after it as far as rehab goes, that takes up most of his day.

The 2015 Players’ Championship winner also confirmed that the pair had spent time together during Woods’ rehab, after watching the 2021 Masters together back in April, after Fowler failed to secure a place at Augusta for the first time in 11 years.

The 32-year-old added: “[We were] both disappointed that we were not out there [at Augusta] playing, But he’s not lacking any fire in there right now, he never has.”

Woods’ last PGA Tour title came at the 2019 ZOZO Championship, where his three shot victory over Hideki Matsuyama at Sherwood Country Club made him the joint-most successful player on the Tour, after equaling Sam Snead’s record of 82 tournament wins.

However, since the historic win the 45-year-old has featured in just four PGA Tour events in just under two years due to an ongoing back injury, the coronavirus pandemic and his car accident earlier this year.

Ryder Cup 2012 at Medinah: How the players rated 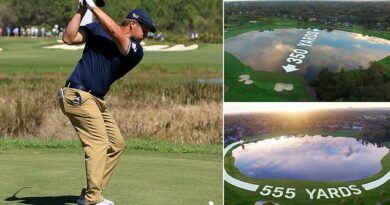