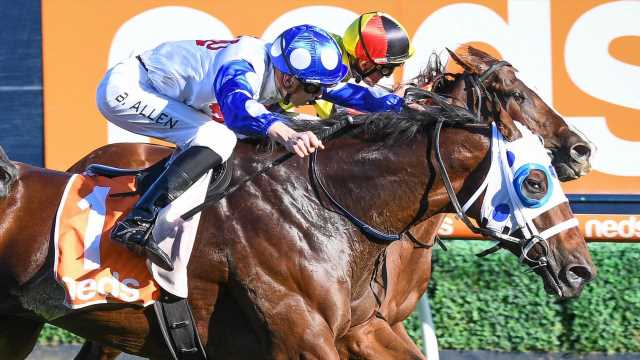 Mr Quickie will return to Queensland next month in pursuit of a third Group 1 and second in the Sunshine State.

The Queensland Derby winner, who broke through to claim the Toorak Handicap last spring, showed his customary big finish to win the Group 3 Victoria Handicap on Saturday at Caulfield.

“We considered the Doncaster, but it’s generally won by a lightweight horse, so we took that off the table and three the idea around of the Stradbroke, first-up, 1400 (metres),” Dalziel said.

“We think VOBIS Gold day and then seven weeks into a Stradbroke, which is generally a Group 1 run at a quicker speed, so that will be the plan.”

Mr Quickie is back with a bang in the Victoria Handicap.

Mr Quickie was the widest runner turning for home despite being buffeted on the bend sustained the gallop to reel in bonny Tasmanian mare Still A Star, as Galaxy Raider flashed to grab third.

Jockey Ben Allen, who boasts a perfect record on Mr Quickie was the beneficiary of the stable’s late decision to run in the Victoria Handicap, with Jamie Kah already booked on another runner.

“That’s my fourth ride on him for my fourth win on him, I haven’t been beaten on him, so hopefully I can keep the ride wherever he goes next start,” Allen said.

“It’s good to get a win for this group of owners, especially Phillip Stokes. He’s been a big supporter of mine and he’s always helping me out when I need it.”

Meanwhile, Hang Man booked his own ticket to Queensland with a win in the Group 3 Easter Cup.

The evergreen seven year-old gelding, a winner of three of his past four starts now, ran over the top of Persan in the straight after tracking the favourite the entire 2000m journey.

Jockey Daniel Stackhouse, who recorded a Saturday double, nailed the race tactically, following Persan every step of the way.

“I just had to bide my time, wait until we straightened up to get going,” Stackhouse said.

“He (Persan) gave me a beautiful cart into it and this horse is in great form.”

Le Don De Vie disappointed as second favourite, rolling along in front only to puncture under pressure in the straight.

Coral-Eclipse return at Sandown still on for Enable

Vinndication back in JLT frame at Cheltenham Festival