Godolphin trainer James Cummings had thoughts all week of not running Alizee in Saturday's Apollo Stakes but was rewarded for gambling that the track would be firm enough as she chalked the 10th win of her career at Randwick.

Hugh Bowman used the rails draw to put Alizee ($3.50) behind the speed, and the giant mare was able to take a run on the inside and accelerate to just beat Dreamforce ($2.60 fav) in driving finish.

Cummings only had to look at her wet track record to know that, if the ground had too much cut in it, she would be better at home. 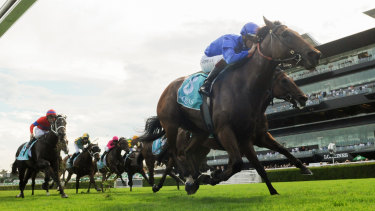 Hugh Bowman gets the drop on rivals with Alizee in the Apollo Stakes.Credit:AAP

"Her wet track record doesn't read terribly, but there are wet track wins, and there are wet-track wins,” Cummings said. “We were really 50-50 on whether we wanted to run on a soft seven. We deliberated over it very carefully.

"I pestered [ATC racecourse manager] Nevesh Ramdhani all week. I even rang the jockey who did the race-day gallop this morning, Sam Clipperton, and he gave me a blow by blow.

"She has come back great and we were confident in her. We're training her to build throughout her preparation.”

Alizee had the benefit of a second in the Expressway Stakes behind Standout under her belt and, with that fitness edge, Bowman was able to have her ready to strike at the top of the straight.

"She is a lot more settled now and she showed that first-up, so I wasn't afraid to let her be where she was comfortable,” Bowman said.

"She gave me the confidence to ride her where she was happy and, from barrier one, that put her in the gun spot.

"The way the track is, I wasn't worried about getting out. I knew I'd get room somewhere.”

It gave Bowman a treble after winning the Light Fingers Stakes on Flit and on Matowi earlier in the day, which was a welcome return to the winning circle.

"I rode without much success over the summer months, so it is nice now the good horses are back they're starting to run for me,” he said.

Cummings has a plethora of races to choose from with Alizee. He mentioned the Futurity next week at Caulfield, the All-Star Mile, Chipping Norton Stakes and Canterbury Stakes.

Alizee had a short neck to spare from Dreamforce at the post with Happy Clapper ($5.50) another 1¼ lengths back in third.

Nash Rawiller decided to sit Dreamforce off the leader Hush Writer and he felt like the winner when he loomed up in the straight, the way his mount had relaxed without the blinkers.

“You wouldn’t believe a horse could go that good and get beaten,” Rawiller said. “It was a good tussle and, with a run under the belt, she was just too good on the day.”

Dreamforce’s trainer, John Thompson, said he would continue without the blinkers on the seven-year-old as he heads to the Chipping Norton Stakes.

“I think he relaxed without them, and that would help him get a strong mile next time,” Thompson said.

Happy Clapper didn’t get clear until well into the final 200m and found the line hard.

“He is a horse that needs to get out and grind home, and Tommy [Berry] said if he got clear earlier he would have made it interesting,” trainer Pat Webster said.

“He is back and still there.”

Race-by-race preview and tips for Muswellbrook on Sunday

Plot thickens amid angry Folau claims
We and our partners use cookies on this site to improve our service, perform analytics, personalize advertising, measure advertising performance, and remember website preferences.Ok