Home » Horse Racing » Cummings: ‘We are all in awe of Winx’

GODOLPHIN trainer James Cummings had a succinct reply when asked about the enormity of the task confronting his stayer Avilius in his clash with mighty mare Winx in the $5 million Cox Plate at Moonee Valley on Saturday.

“We are in an enviable position with Avilius as, although we are there to win, we can also appreciate that every so often you bump into a horse like Winx that is so good, she makes the hairs on the back of your neck stand up when she wins,’’ Cummings said.

“The Godolphin stable in the past has been in a position where we have a sniff of beating the champion mare but just when you think you have a sniff, she puts 10 lengths on them.

“We are all in awe of Winx, she is a champion and deserving Cox Plate favourite.’’

Avilius is unbeaten in three Australian starts but Cummings said his horse is “flying under the radar” going into the Cox Plate.

“It is interesting when there is a dominant champion like Winx as all the pressure is on them,’’ he said. “There is no pressure on us and we are hoping Avilius will be running a nice race late.’’

Avilius is being aimed at the Melbourne Cup and Cummings has drawn on an achievement of his late grandfather, the legendary Bart Cummings, who prepared champion Saintly to win the 1996 Cox Plate-Melbourne Cup double.

Avilius will put his unbeaten Australian run on the line when he takes on Winx in the Cox Plate. Picture: Getty ImagesSource:Getty Images

“Saintly wasn’t at his best in The Metropolitan but he thrived in Melbourne and needed the run in the Cox Plate before the Melbourne Cup,’’ James Cummings said.

“He was able to win the Cox Plate, admittedly there was no Winx in that field, and then he was even better in the Cup.

“If Avilius lets down in a similar fashion in the Cox Plate we will know we are in business for the Melbourne Cup.’’

Avilius qualified for the Melbourne Cup by winning the Bart Cummings (2500m) at Flemington earlier this month.

Almandin won both races in 2016 and didn’t have a run in between but Cummings said Avilius is a different type of stayer.

Trainer James Cummings is expecting a late surge from Avilius in the Cox Plate as the stayer revs up for the Melbourne Cup. Picture: AAPSource:AAP

“After he won the Bart Cummings we were forced to pay up for the Cox Plate because he has continued to thrive,’’ Cummings said.

“Almandin was a really ‘racey’ horse who kept himself fit and Lloyd (Williams) and the team at Macedon Lodge knew what their horse needed.

“Avilius does so well, he sees the reflection of himself in his feed bin every morning, and he needs this run to keep him ticking over. He is coming back to 2000m which he enjoys and this race will stimulate him mentally for the Melbourne Cup.’’

Originally published as Cummings: ‘We are all in awe of Winx’ 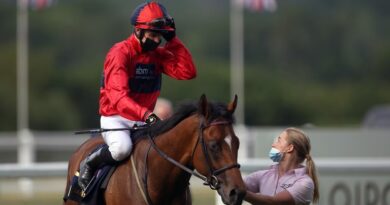