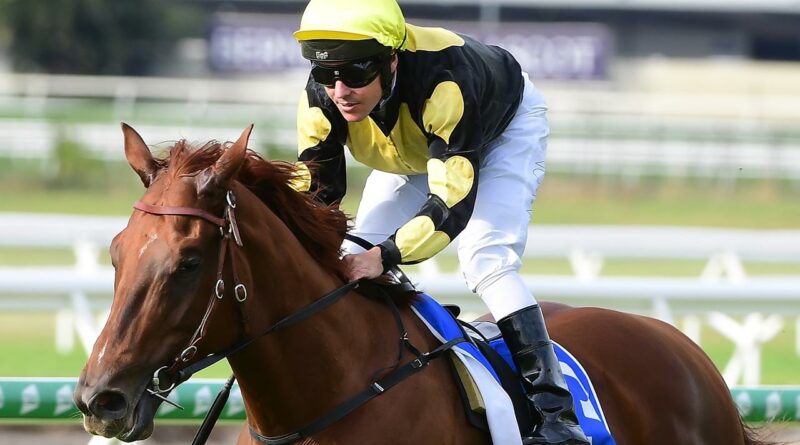 David Vandyke concedes there is currently no way he would take the $34 that bookies are offering about his unbeaten hype galloper Orbisyn winning The Everest.

But by the same token, he said the dizzy heights of rich Sydney spring races may not be beyond his unbeaten Queensland star who has won four from four in breathtaking fashion.

Orbisyn may not have beaten much in his career to date but he has piqued interest everywhere, including from potential buyers who have been knocked back by owner/breeder Jan McMillan despite offering up more than $1m for the three-year-old gelding.

Vandyke holds the exciting galloper, who is named after the great musician Roy “The Big O” Orbison, in very high esteem.

“He was showing before he had a race start as much as any horse that I have ever trained,” Vandyke said.

“But in saying that, the people who frame these markets are often better judges than I am.

“We have had no interest from Everest slot-holders as yet and I’d be surprised if we did until he returns to racing.

“I hope that he justifies the hype surrounding him when he comes back and then, maybe, who knows?”

Vandyke knows what it takes to put the polish on a Group 1 champion with the likes of his former star Yankee Rose and most recently when Alligator Blood claimed the Australian Guineas last year.

He certainly isn’t getting ahead of himself with Orbisyn, who was put away for a spell after blitzing his opposition at Doomben in a midweek Class 3 race on June 2.

However, Vandyke believes that if Orbisyn continues his rapid-fire improvement he could be a Sydney spring player.

The astute trainer said more will be known when Orbisyn returns in a no-metro win race at Doomben on September 11.

“He hasn’t run exceptional times and he hasn’t beaten any top-class horses plus he is a bit quirky, so the jury is out,” Vandyke said.

“But the signs are very good that he can progress forward into some of the better races.

“Hence the reason we have managed his career so he will be ready to perform and step up in the spring.

“He’s not simple, he doesn’t just walk around the enclosure and roll around to the barriers without presenting some challenges. He can sometimes put on a little show.

“His owner and I are on the same page, we want to look after him so he is still racing in two or three years.

“The way we are doing that is by simply climbing the ladder and not jumping too many rungs at once.”

Vandyke has high hopes for a Sydney spring campaign for another of his exciting gallopers, four-year-old Weona Smartone who has only tasted defeat once in six starts.

After being beaten on debut, the well-named Weona Smartone has now strung together five on the trot and put a space job on his rivals when last seen winning by five lengths at Doomben.

Vandyke said Weona Smartone is rapidly bridging the gap between performance and potential and would be more than just a Sydney spring travelling companion for his more hyped stablemate Orbisyn.

“His last win was brilliant and this is a horse who has already run (good) time … I’m optimistic about where he is going to head,” Vandyke said.

“I’m going to stable Weona Smartone and Orbisyn next to each other this preparation as they both might end up down south in the spring.

“We will get them used to each other so they can be mates if they end up going away.

“The great thing about Weona Smartone is that in the early days he had been getting his head up and over-racing and charging, but now he is relaxing better and he is still showing brilliant gate speed.”

Weona Smartone is likely to next race in a Class Six at Doomben on August 28.

Method out to shine again at Newbury