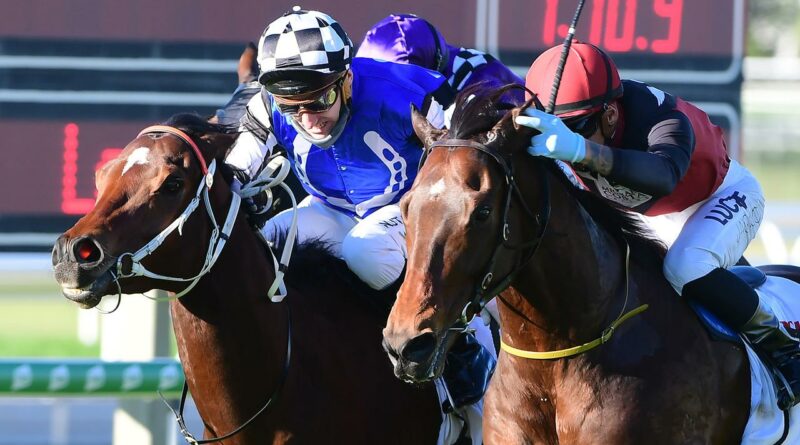 Kris Lees maintained his run of success in Brisbane this season but had to hold on to the win in the Doomben stewards’ room after connections of hot favourite Axe fired in a protest.

Andrew Mallyon, rider of winner Snowzone, was adamant he was going to win and told stewards if he had been beaten on crossing the line he would have fired in a protest against Axe.

Promising sprinter Axe was sent out the raging $1.90 favourite in the $75,000 Class 6 Plate (1200m) and many punters who piled into him thought they may have got the chocolates in a deceptive finish.

But the judge ruled Australian Bloodstock-owned Snowzone, sent out $16 after being well beaten at Rosehill in his last two starts, had won by a nose.

It was off to the stewards’ room to sort things out after Axe’s jockey Jag Guthmann-Chester lodged a protest alleging interference in the last 100m after the horses bumped.

Guthmann-Chester told stewards Axe would have won but for the horses coming together when Snowzone shifted out.

However Mallyon was having none of it.

“If I didn’t win the race we would still be in here (stewards’ room),” Mallyon said, alleging Axe had shifted in on him to cause the initial interference

Chief steward Peter Chadwick dismissed the protest, ruling Axe had instigated the interference when shifting in slightly in the first instance.

Mel Eggleston, who manages the Lees stable on the Gold Coast, said Doomben continued to be a happy hunting zone for Snowzone who has now won five of his seven career starts at the track.

“He just loves this track, he is a miniature Chief De Beers,” Eggleston quipped.

“He goes no good across the road at Eagle Farm, but he loves this track.”

Hinged is raced by her breeder, retired dentist Dr Kim McCasker, and trained in Toowoomba by Michael Nolan.

The duo has long been a winning team with many top horses but former star sprinter and 1999 Group 1 Doomben 10,000 winner Laurie’s Lottery remains the pick of the lot.

Hinged made it four wins from six starts when she snatched a strong victory from the jaws of defeat in the $75,000 QTIS 2YO Handicap (1350m).

Previously unbeaten Rob Heathcote filly Rayjen appeared to have the race shot to bits when she loomed up to win but Hinged ($2.80 fav) had other ideas.

“She has come a long way in a short space of time to city racing,” Nolan said.

“She probably should be unbeaten if some things hadn’t gone against her.

“She really had to dig in under the 59kg today, so onwards and upwards with her.”

Ryan Maloney rode a Doomben treble, increasing his lead by one over Jim Byrne in the race for the Brisbane jockeys’ premiership,

Maloney now holds a five-win lead over Byrne, who rode a Doomben double.

Pierata gives Berry a thrill for the ages