Frankie Dettori enjoyed one of the most remarkable days of his illustrious career as Enable’s historic win in the Breeders’ Cup Turf crowned a glittering double for the jockey at the world championship of racing.

Dettori had already landed the Breeders’ Cup Mile on Sir Michael Stoute-trained Expert Eye in the colours of Khaled Abdullah when he lined up on the same owner’s dual Prix De L’Arc de Triomphe winner.

But the big one was the $4million (£3.1m) Turf and no Arc winner had ever followed up with a win at the Breeders’ Cup in the same season. 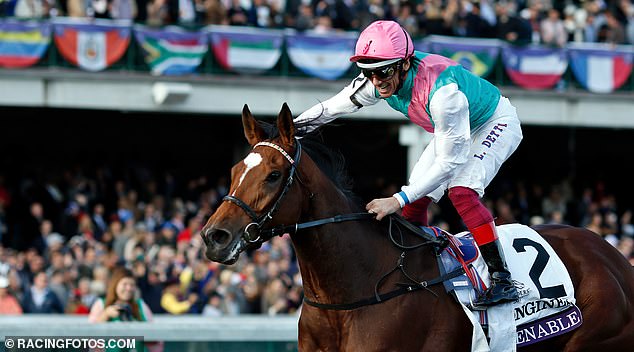 The eight that had failed included two that Dettori had ridden two of them, Golden Horn and Sakhee, but the 47-year-old Italian born jockey made sure he did not make it three as Enable fought off Aidan O’Brien’s Magical to win by three-quarters of a length in a thrilling and protracted tussle up the home straight.

It was nine lengths further back to third-placed Sadler’s Joy.

Fittingly, such an important win, his 14th at the Breeders’ Cup, came on Dettori’s 100th Breeders’ Cup ride but he said his overwhelming feeling was relief after a race went nowhere near his plan.

Dettori, who deliberately steered Enable to the centre of the track to avoid the softer ground near the inside rail, said: ‘She didn’t break that well..The pace was on straight away and I was trying to get off the fence but I was pinned there going into the first turn. Her wheels were spinning and I was struggling to hold my position.

‘Magical took me on pretty early and after that it was a punch up to see who was the best. But when I asked her she went half a length up. I could see Ryan was in difficulty but he was like a wasp and he wouldn’t go away.

‘She was strong for me, I know she likes soft ground but she found it difficult. She is a superstar.’

After an injury-interupted season when she had been restricted to only two runs in Europe, Gosden reckoned Enable had got the job done without being at her best.

The trainer said: ‘She was magnificent and very brave. She had a fabulous filly running against her and they were way clear of the third. We have had a difficult run with her and she is still not back to where she was last year.’

A decision on whether Enable stays in training will not be made in haste. But it might be very tempting to try to have a shot at being the first three-time Arc winner.

Dettori, who has joked he loves Enable more than his wife Catherine, regards her as the best filly he has ever ridden and her record now nudges her towards the lists of racing greats.

As well as yesterday’s win in the Turf, the daughter of Nathaniel has won two Arcs and also numbers the King George and the English and Irish Oaks among her seven group one wins.

With Charlie Appleby also winning the Juvenile Turf with William Buick-ridden Line of Duty, British trainers secured three wins at the meeting, an above par score.

Hopes of a wins in the $6m Classic run on Dirt, however, were dashed despite Saeed Bin Suroor-trained Thunder Snow finishing third to John Sadler-trained favourite Accelerate.

O’Brien’s Mendelssohn was fifth, plugging on bravely despite setting a searching pace in front, while Gosden’s Roaring Lion was tailed off last under Oisin Murphy after predictably finding the kickback too much to handle. 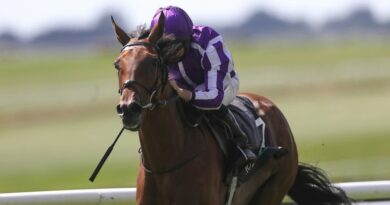 Snowfall bids for more Group One glory in Yorkshire Oaks 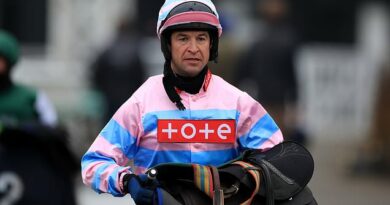 PJA demands that the BHA halt their action against Robbie Dunne