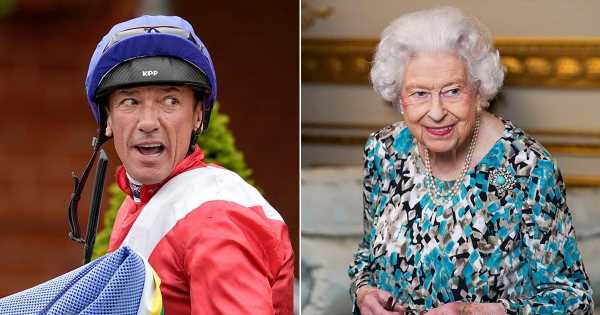 The Italian horse racing jockey was left mortified when his dog urinated on it following an eventful few hours.

Dettori, who learned on Tuesday that his top horse Stradivarius will race on next season, had lost the pet.

After she escaped from his property during a party, one of the monarch's staff found the dog, after she ran over fields nearby.

Dettori said on Virgin Radio: "The Queen's manager, who lived in the next village, found the dog on the street and he collected her.

"I got a phone call in the morning to say, 'We've found your dog, she's safe and sound, can you please come and collect her?'

"So when I rang the Queen's manager I said, 'Listen, I got reason to believe you've got my dog.'"

After asking when he could collect the misbehaving animal, Dettori was told he could visit the Queen as she was going to the races that day.

"He said, 'Well, we're on our way to pick up the Queen at Sandringham and she's going to come down to Newmarket to watch some more horses gallop, so if you come about seven o'clock you can say hello to the Queen and collect the dog'."

Delighted Dettori told his wife the good news, who thought he was joking about the royal find.

"I said, 'The Queen's got it!'" he told the radio hosts who laughed loudly.

The racing celebrity took one of his daughters with him on the trip to meet the Queen. who is currently enjoying her best ever season for winners.

One of her racehorses, Reach For The Moon, has teamed up with Dettori for two impressive triumphs – and could run in the 2022 Platinum Jubilee Derby next summer.

Upon meeting the monarch, Dettori enjoyed speaking to her, until his red-faced moment involving the over-excited dog.

He went on: "And the Queen was there, she was her usual immaculate [self] and we had a little chit chat.

"And they let the dog out of the kitchen and she ran straight to me and the dog peed on the Persian carpet," Dettori told Ricky Wilson and Gabby Roslin on the breakfast show this morning.

"So I was truly embarrassed, it was an embarrassing moment and I got ushered out of the door very gently and that was it."

The amusing discussion came hours before Dettori learned his regular mount Stradivarius will remain in training next season.

Grosvenor Sport is offering new customers the chance to get £30 in FREE BETS when you bet £10 on horse racing.

Simply register, place you £10 bet on horse racing and you will receive £30 in free bets.

Fans feared he would be retired after suffering two defeats earlier this month.

Stradivarius has won the Gold Cup at Royal Ascot on three occasions, The Queen's favourite meeting.

John Gosden, who trains the stayer with son Thady, said: "Mr Nielsen (owner) has been in to see the horse today and the intention is for Stradivarius to stay in training next year with the intention of three races: a prep run, the Ascot Gold Cup and the Goodwood Cup, at this stage."

The chestnut, the winner of more than £3million in prize money, delighted racegoers with a narrow supremacy over Spanish Mission at York in August.