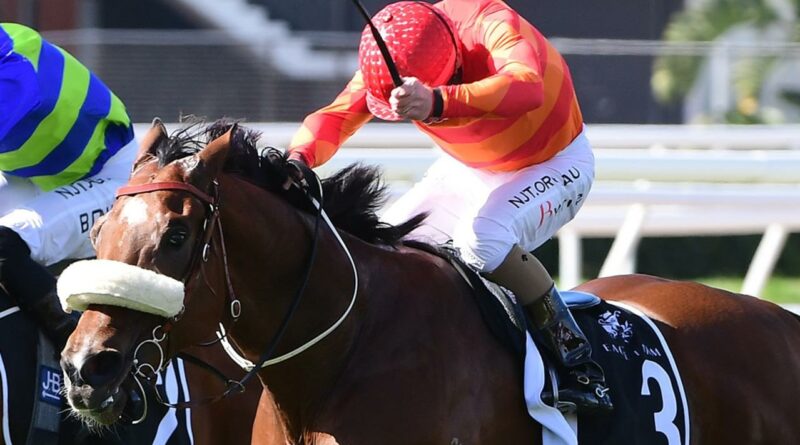 Desleigh Forster has her first Stradbroke Handicap runner as the bubble surrounding hot-pot favourite Ayrton burst and ruled him out of contention for Queensland’s premier race.

Stradbroke markets took a dramatic reshuffle on Saturday as Apache Chase went wire-to-wire in the Group 3 Fred Best Classic under Jim Byrne to book a ticket into the $1.5 million feature, while Mick Price said his boom horse Ayrton was beaten “fair and square.”

Settling third in running, just off the speed set by Apache Chase, Ayrton ($1.50) wobbled around the Eagle Farm turn and never showed the devastating turn of foot that made him one of Melbourne’s hottest property.

“He had his chance to run them down,” Price said.

“He got beat fair and square. The other horse is a track and distance specialist and my horse had his chance.

“We won’t be going to the Stradbroke off that run, it will be the Gunsynd (Classic) because he won’t get in.”

Too strong in the Fred Best Classic for @Desracing74 💪 pic.twitter.com/EpZGNrieZ0

A jubilant Forster was overwhelmed post-race, saying she went in believing she could knock off the hot favourite.

“I always said there was more than just one horse in this race, and this horse is a good horse,” she said.

“He makes his own luck and gets out and does the hard yards. He is a serious horse.

“After he worked on Tuesday morning I said they would want to bring their A-game, actually their A-plus game.”

Allotted 49.5kg in the Stradbroke, Forster said she would give Byrne the opportunity to ride 1kg over should he make the decision to waste down over the next fortnight.

“I’ve never had a Stradbroke runner – just an emergency.

“This was always out main goal (getting to a Stradbroke).”

Racing clockwise for the first time, jockey Jamie Kah said Ayrton struggled with the new way of going but believed he would enjoy the step up to 1600m in the Gunsynd on Stradbroke day.

“He ran really well, he got lost going around this way,” she said.

“He has been so professional in his last few starts and today he was just a bit lost.

“Now he has gone this way, I think a mile will be fine. When I got him off the bit, he got lost.”

Apache Chase is now assured of a Stradbroke start as the winner of the Fred Best is awarded a golden ticket into the Group 1 in a fortnight.

Such had been Ayrton’s hold on Stradbroke betting, he had been the $3.50 favourite prior to the Fred Best despite not having qualified for the race.

Other than Apache Chase – who is now $17 for the Stradbroke – the big winner has been Wild Planet and The Harrovian, who rocketed into single-figure quotes.

With Kah flying home to Melbourne on Sunday, Ayrton’s connections are likely to need a new jockey for the Gunsynd as current border restrictions prevent those from Victoria from arriving in Queensland.

Jockey Josh Parr got his eye in for the ride on Queensland Oaks fancy Bargain next week with a strong staying win in the Group 3 Premier’s Cup (2400m) aboard Spirit Ridge.

When Jamie Kah loomed up on the Peter and Paul Snowden-trained Cariff halfway up the straight, the race looked all but over, but it was Parr who lifted Spirit Ridge in the final strides to grab the prize.

“We got there just in time and I am so happy to win on him,” he said.

“He is a lovely horse and he tries so hard – I am really thrilled.

“Down the back I thought I had made a bit of a blue, I eased one pair too many when I let Cariff go off in front of me.

“I was glad when the speed came into the race after that, it was just a matter of being patient then and he took me the rest of the way.

“European stayers – we get tired of saying it – but they are different to ours and he is a powerhouse.”

Dubai World Cup card off due to coronavirus