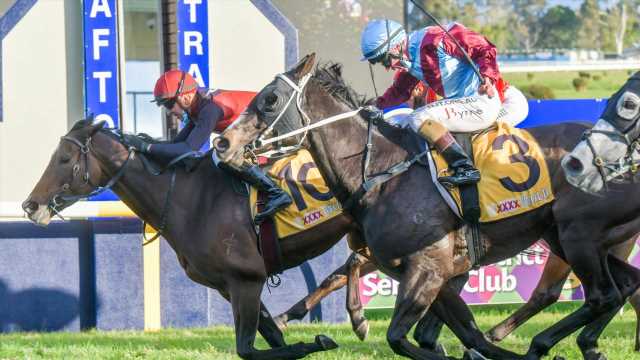 Purrfect Deal, trained on the Gold Coast by Michael Costa, held off the challenges by stayers from three leading Sydney stables to take out the Listed $200,000 Grafton Cup (2350m) on Thursday.

In an exciting finish, Purrfect Deal held off Laure Me In, Parry Sound and Berdibek to win narrowly.

Although there might have been some hard luck stories behind the winner, it should not detract from Purrfect Deal’s win and the training effort of Costa, who spent 18 months in the Grafton region before taking out a trainer’s licence.

“Spencer putting the pace in the race enabled Purrfect Deal to get into a ‘sweet’ spot and this mare is just so tough.”

Purrfect Deal’s Grafton Cup win was a deserved result for Costa who just missed winning the Ramornie Handicap a day earlier when his sprinter Phobetor was collared by Southern Lad near the line.

Where the dream of winning the Grafton Cup begun. My old rented unit in Grafton! pic.twitter.com/fAL44EVDNJ

Jockey Ben Thompson gave Purrfect Deal the run of the race and the mare duly delivered, scoring her seventh win from just 11 starts.

“She is an out and out stayer but she had to earn it today,” Thompson said after the race.

“Although we drew barrier five, I had to use a bit of gas but ended up finding the rail. We were following a decent horse (Spencer) and a good jockey in Christian Reith on the leader. She gunned it out really well.”

Laure Me In loomed as a chance but couldn’t bridge the gap on a defiant Purrfect Deal while Parry Sound and Berdibek were held up at vital stages in the straight before charging home to be beaten less than a length.

Race-by-race tips and preview for Rosehill on Saturday