A trainer of 50 years secured his first group 1 victory in the time-honoured Lightning Stakes on Saturday, with Gytrash causing a boilover down the Flemington straight. 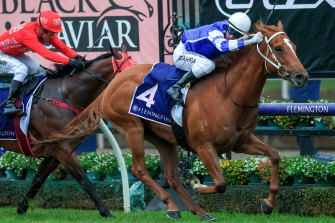 Morphettville trainer Gordon Richards, 68, said he had never really been close to winning at the elite level, but if any horse was going to do it, Gytrash was the one.

The win was duly celebrated by a large group of owners, with Richards deciding to cancel a flight to the Perth sales in favour of celebrating the crowning moment of his career.

"If ever I was going to win one, this is the horse that would do it. He's just a machine.

"I've had a couple of runners in a Goodwood and that's about it so this is really special. He was a cheap horse, $41,000 I think I paid for him."

In a tactical masterstroke, experienced Victorian rider Mark Zahra made the early decision to head to the inside of the track down the Flemington straight, parking himself behind veteran sprinter Redzel.

Odds-on favourite Nature Strip, ridden by James McDonald, instead went to the outside, but it proved to his detriment as he faded to finish fourth, with Loving Gaby storming to third on the outside.

"At the start I lobbed up behind Redzel on the inside and he travelled like the winner a long way out," Zahra said.

"It was just kind of hard weighing up where the outside horses were and I knew Nature Strip was in a bit of trouble, but he did give a really good kick. He was too good in the end.

"I'm not the best track walker but I thought the inside was better. Of course you need the speed to go where you go and when Redzel went it saved me going out. He gave me a good kick and I travelled like the winner and he was too good."

Richards, who will saddle up Bold Star in next Saturday's Oakleigh Plate, said it was great having a stable of rising stars.

"It's just having good horses, every trainer will tell you that," he said.

"If the animals aren't any good, you're not going to win a race. At the moment I'm lucky with Garner as well [as Bold Star].

The son of Lope De Vega will head to the Newmarket Handicap on March 7, searching for a double that's been completed 14 times.

Racing in Dundalk abandoned due to 'serious medical incident'