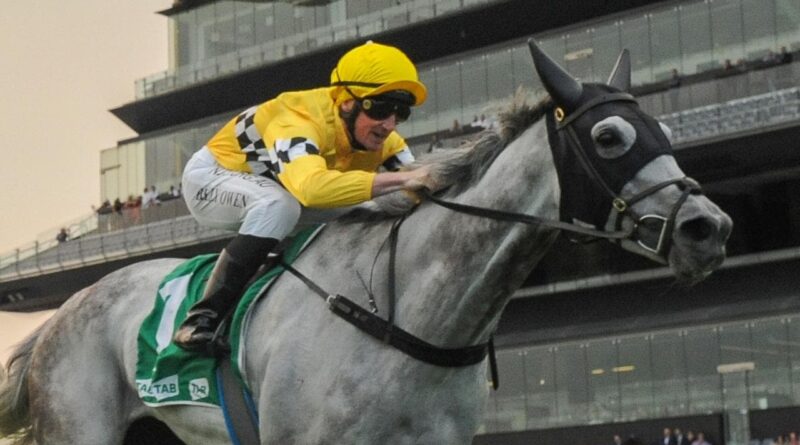 Finally, things are falling into place for Berdibek ahead of a feature race.

Brenton Avdulla will ride him out of barrier five on a Good 4 surface which is the combination he’s been looking for after getting gates 11, 10, 10, nine and 12.

He deserves a win after running second in the McKell Cup three runs back and a close fourth behind Purrfect Deal in the Grafton Cup six weeks ago.

“He’s finally drawn a barrier so you never know, a win might come on Thursday,” O’Shea said.

“Hopefully the good gate reflects in his performance. He kept getting wet tracks and wide draws and now he’s got a dry track and good draw so he’ll run a lot better on Thursday.

“I’ve been really happy with him all preparation. His runs have been super without a lot of luck which has been a result of his bad barriers.

“On Thursday he’s got a nice draw and Brenton understands him so it should be a nice opportunity for him to run well.”

His close fourth in the Grafton Cup was also behind Laure Me In who won in town last Saturday.

And he should enjoy himself as he sees the western Sydney track for the first time.

“It won’t matter. Hawkesbury is a good track and I don’t think it there will be any dramas with the track and he’s going to run very well,” O’Shea said.

“I think the field is a bit stronger than usual. Not too many Queensland Derby winners (Kureracha) resume in a Rowley Mile.

“To be fair, the race has got a bit more depth than in previous years.”

O’Shea will also trial his Everest runner Lost And Running at Randwick on Friday morning.

He will run in the second heat at 8.40am, 10 minutes before stablemate Lion’s Roar goes around.

Expect a good trial from Lost And Running.

“We’ll let them rip and see what happens on Friday,” O’Shea said.

“He’s big and burly and he’s just going to blow out a few cobwebs, but he will trial well.

“He’s not going to be wound up early in his preparation. He’ll just be poking along, but with the way he’s going at home he’ll trial well because he’s in a good frame of mind.”

Lost And Running will trial again in the lead-up to his first-up run in The Shorts on September 18 before going to The Everest third-up in October.

“He’s bigger and stronger. We needed him to improve and he has,” O’Shea said.

Lion’s Roar, the third placegetter in the ATC Derby, isn’t far off racing again and will have his second trial on Friday.

“He’s going to be a good 2000m weight-for-age horse and he’s strengthened up a lot,” O’Shea said.

“We’ve been very happy with him and I expect him to trial well on Friday then go to the Tramway first-up and give a good account of himself.

“Once he gets to the Epsom with a nice weight, he’ll run very well.”

Bartley believes in the Empowerment of mare

If you listen to Tracey Bartley it will be hard to back against his horse Empowerment in the final event at Hawkesbury on Thursday.

The Shooting To Win mare has won three of her past four ahead of Thursday’s Benchmark 64 Handicap (1300m) and Bartley thinks the winning form will continue.

“She’s trained very well and I don’t think they’ll beat her on Thursday,” he said.

“She’ll race up there somewhere and she likes a good fight.”

If you watch the final stages of her win at Scone last start you’ll think she got lucky and fell in.

But it’s misleading because her run wasn’t timed right and Bartley will be telling Hugh Bowman on Thursday not to let her loose too soon as they round the home bend.

“Her form is really good. Even though she won by a small margin last start she (Mikalya Weir) just went a bit too early on her,” Bartley said.

“She put four lengths on them when she went for her at the top of the straight but she should’ve waited to do that until the furlong.

“The start before she just ran away from them.”

Bartley says if he gets the job done again she’ll be set for a $100,000 race at her home track in December.

“She’s got barrier four with Hughie on so we’ll give her this run then put her away from the Magic Millions here (Wyong) later in the year,” he said.

“It will be a nice race to run her in and she’s just got to get enough prizemoney to get a run.”

Crowdy Bay debuts for Bartley today in the second event over 1300m and he’s Mr Plow’s brother. But he’ll run more of a trip in time.

The Wyong trainer wouldn’t rule out a nice run fresh after Crowdy Bay produced a nice winning trial leading into his debut.

“I thought he bounced off that trial well,” he said.

“ … I would imagine he’ll be running fourth or fifth then keep lengthening. I just want to see him finish it off before stepping him up in trip.”

Siskin and Monarch Of Egypt to clash in Railway