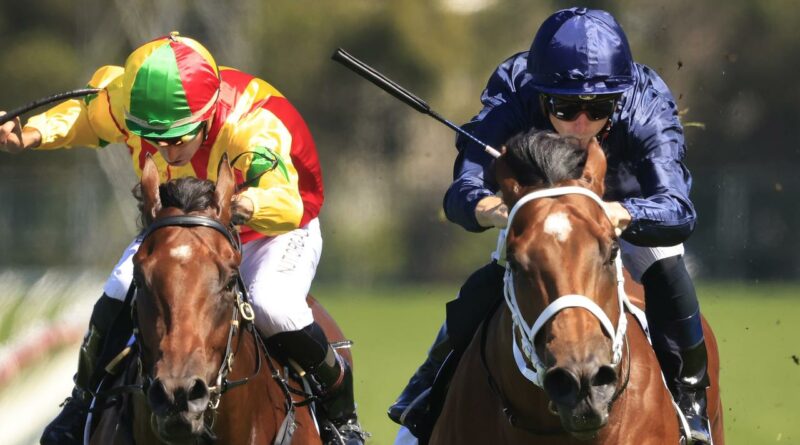 Home Affairs put himself right into the Golden Slipper frame — but don’t rule out Rocket Tiger either.

The result of the Group 2 $250,000 Silver Slipper Stakes (1100m) at Rosehill Gardens probably left more questions unanswered than answered except the winner, Home Affairs, and runner-up, Rocket Tiger, are both very talented two-year-olds.

Trainer Chris Waller described Home Affairs’s win as “a bit ugly” as his colt was left in front a long way out.

“We had to use him from barrier one,’’ Waller said. “We expected Nash (Rawiller, Direct) to lead but we weren’t sure how far it might take us.

Home Affairs too good for them in the Silver Slipper! @mcacajamez guides the @cwallerracing-trained colt to victory in an impressive run. pic.twitter.com/OKTnvrFXPn

“What we didn’t want was to be getting caught up (behind horses) so the win was a little bit ugly. I think that his effort was better than it actually was — to be ‘gassed’ from the start and mid-stages, to go early, he was pretty good.’’

But the connections of the unlucky Rocket Tiger live to fight another day after their modest home-bred ran on strongly to lose by a short neck.

Rocket Tiger was held up for a run in the straight and had to ease off heels then switch course before closing rapidly on the winner.

Trainer Scott Spackman felt Rocket Tiger was unlucky not to have left Rosehill with his unbeaten record intact.

“He should have won,’’ Spackman said. “I don’t think people realise how good this horse is.

“I’ll talk it over with the owners but we might look at the Black Opal Stakes next start.’’

Both youngsters are right track for the $3.5 million Longines Golden Slipper at Rosehill on March 20 after Home Affairs ($3.60) held off the late surge of Rocket Tiger ($16) to win by a short neck with Direct ($17) just over a length away third.

James McDonald, rider of Home Affairs, admitted he had to ride his colt “upside down” to win the Silver Slipper.

“He’s a beautiful colt, he’s got killer looks and good ability with it,’’ McDonald said.

“He should be unbeaten to be fair. He was left a sitting shot, needing the run on the soft ground last start but he’s trained on really well.

“I wasn’t really happy with how it (race) played out. I had to send him a message, come back and ask him to do what I’d expect older horses to do. Obviously he’s green and did it upside down. So he’s got plenty up his sleeve. He’s a very exciting colt.”

TAB Fixed Odd price assessors kept Home Affairs at $15 for the Golden Slipper but slashed Rocket Tiger’s odds from $201 to $26.

Waller said Home Affairs is likely to need another run, probably in the Todman Stakes, to finetune his Golden Slipper preparation.

“He’s a great athlete but at the same time he does well between runs,’’ Waller said.

“He’s the perfect racehorse really for a trainer, you need to work them and need to prepare them properly so we’ll see how he comes through and of course have a talk to the owners and see what they think as well.”

Waller has never won a Golden Slipper but he’s having his best season with his two-year-old team and has Home Affairs, Shaquero and She’s All Class aimed at the world’s richest juvenile race.

“I’m in a privileged position now as a more mature trainer I’m getting entrusted with some nice horses,’’ he said. “In the early days when I was criticised for not being a two-year-old trainer I didn’t have the quality of what we have now.’’

“Shaquero is likely to run in the Skyline Stakes,’’ Waller said. “There are so many variables, barrier draws, track conditions, how they are on the day, so I don’t want to tie them down to a certain race.

“If Shaquero drew wide next week we have the option of saving him for the Todman Stakes.

“She’s All Class will run next week in the Sweet Embrace. She needs to run well next week or we won’t see her again until next spring.’’

Jockey warned off for six months