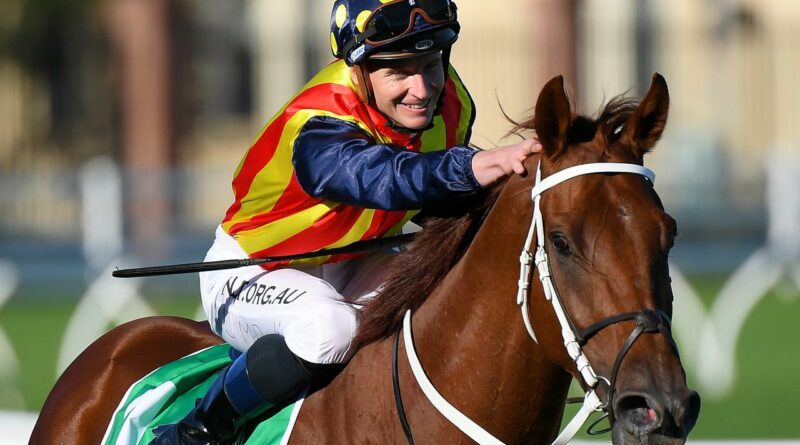 Jockey James McDonald is adamant star sprinter Nature Strip is back at the top of his game and expects the reigning champion to exact revenge on Eduardo in Saturday’s T.J. Smith Stakes (1200m) at Randwick.

Nature Strip is looking for back-to-back T.J. Smith victories after claiming the premier autumn sprint with a commanding frontrunning effort 12 months ago.

He is the $3.80 favourite with TAB.com.au to repeat the dose this weekend but is expected to face stiff competition from the likes of Eduardo and Godolphin star Bivouac.

The Joseph Pride-trained Eduardo got the better of Nature Strip when they last met in the Group 2 Challenge Stakes when he nailed Chris Waller’s gelding at the post.

Eduardo by a nose to Nature Strip! pic.twitter.com/n5UThScS0z

Eduardo went onto win The Galaxy at his next start and is a $4.80 second elect with bookies to make it two Group 1s on the bounce.

But McDonald expects Eduardo to be met with a vastly different challenge from Nature Strip when the pair face off for round two this weekend.

“I don’t think he (Nature Strip) can go much better. He is going really, really well,” McDonald said.

“It will be a good race and our horse is in great form.

“He went super in the Challenge Stakes when obviously he jumped from the widest barrier and was off the track the majority of the race.

“Eduardo had every conceivable chance to win that and ended up winning it on the line but our fella will improve off that as well.”

Nature Strip has recaptured some of his best form this winter after going winless from four spring starts including a disappointing seventh in The Everest.

The five-time Group 1 winner battled niggling issues while also tossing McDonald off his back in a barrier trial in a tumultuous spring campaign.

He returned with a commanding win in the Lightning Stakes back in February before his thrilling second up showdown with Eduardo.

“His action is perfect at the moment,” McDonald said.

“Nothing went right last preparation with the hiccup at the barrier trials and it was just catch-up all the time so to have him back where he is now, he is going really well.”

The TJ Smith Stakes is far from a two-horse affairs with VRC Sprint Classic winner Bivouac ($5) looking to recapture his best in the sprint.

William Reid victor Masked Crusader ($8.50) and the Waller-trained Haut Brion Her ($8.50) are the only other runners in single digits.

Originally published asNature Strip ‘could not be going any better’