“Just a s–t day,” Kah, left stranded on 99 city winners this season, said with a wry smile after going eight races without success at Sandown Hillside on Wednesday.

As somebody that would rather fly under the radar, Kah certainly knows how to build the tension.

For a fourth straight city meeting — following trips to Caulfield, Sandown, Flemington and Sandown again — Kah will return to Caulfield on Saturday chasing her piece of Victorian racing history.

Kah was Winx odds ($1.05) on Wednesday to become the first jockey to ride 100 Melbourne winners in a single season but she could muster only three thirds in an increasingly frustrating day for her in the saddle.

“Most of the horses she’s been on have been well-backed, usually general public money, hoping they’ll get her over the line,” Swannie, a 40-year bookmaker, said after Kah went five races without success.

“They have cooled off a little bit, probably got their fingers burnt, but still cheering her on.”

Four of Kah’s eight mounts jumped favourite on Wednesday but contrary to the market support, skewed no doubt due to the aforementioned “factor”, the 25-year-old never looked likely.

Not for want of trying, though.

When she settled midfield – inside or out – the horses failed to finish off.

When she attempted to swoop from the back she ran out of ground.

When she box-seated she went backwards.

Brett Prebble, whose record of 99½ winners set in 1999-2000 will stand for a few more days at least, rode the first winner, ironically, with his only ride on the card.

Kah-ridden Murrumbidgee River in race 2 was the only runner, in hindsight, to really get racegoer heart rates pulsing when the three-year-old, taking on the older horses, launched from last to snare third.

An extra 20m and this story may not be written.

After favourite Write The Score, a market drifter, failed to fire a shot in race 3, searching Kah rides aboard eventual placegetters So Risque (race 4) and Heaven’s Gift (race 5) peaked in the closing stages.

Melbourne Racing Club members and former TAB retail outlet operators Allan and Anita Mears, who were among the first to occupy a prime spot on the lawn, will aim to get to Caulfield on Saturday.

“We’ve been following her,” Anita said.

“It’s a great story, women have been put down as jockeys for so long, but now they’re holding their own and a lot more coming after her, a lot more girls.”

Kah has eight rides at Caulfield on Saturday, of which six opened as favourites in betting on Wednesday.

Sent out an easing third favourite. Sat outside the leader in the run but came under pressure on turning for home and dropped out of contention. Brett Prebble, whose record Kah is chasing, ironically gets the bob in a tight finish with his only ride on the card.

Let down strongly from last but ultimately had too much to do with the heavily backed favourite unable to peg back LADY IN THE SKY and BIG BREW.

Posted three wide. Slid into contention approaching the bend but came under pressure soon after and dropped out.

Suck run in behind the leaders and held position deep into the straight. Ridden quietly until the gap appeared and presented to be in the finish but peaked on the run to finish third.

Good spot midfield on the rails. Bided time, got the run and looked to be going well but unable to take necessary ground off TOFF CHOICE and CAFE TORTONI.

Stalked the leaders. Poised to let down in the straight but only one-paced.

Box seated – her best placement of the day arguably – but horse disappointed in the straight, among first beaten.

Settled towards the back and never likely. Appeared to be labouring early in the straight but picked up to make some late ground. 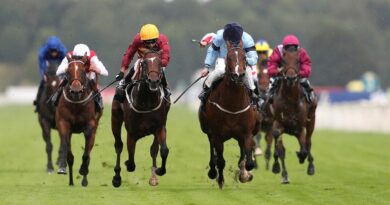 Dante contender Gear Up has 'all the credentials'

Mighty run from Gurkha at Kempton 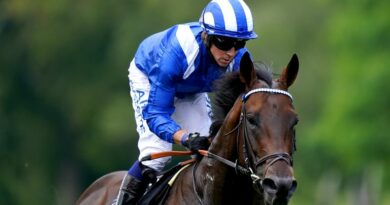 Celebration Mile: Baaeed could wait for Goodwood in August after exciting connections with Newmarket victory