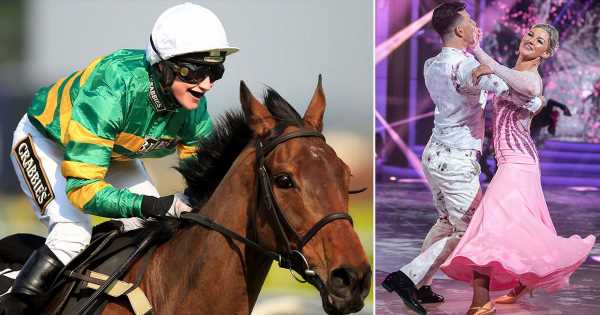 She has ridden in some of the toughest races, but ex-jockey Nina Carberry says dancing is the "hardest thing" she has done.

The former sportswoman, who competed in the Grand National six times, has made a flying start to her stint on Dancing with the Stars.

Paired with pro dancer Pasquale La Rocca on the RTE hit show, they gained the highest score on the opening night of the current series.

Their quick step, which featured some excellent footwork from the 37-year-old newcomer, earned the pair 19 points.

Carberry, who also impressed viewers in the competition, is up against the likes of Missy Keating, the daughter of Ronan Keating and recently retired pro-cyclist Nicolas Roche.

As well as riding around the Aintree course, with its famous spruce fences, Carberry won seven times at the Cheltenham Festival.

But before her dancing debut, she told the Racing Post : "I took it on thinking it would be fine but, no, it's the hardest thing I've done in my whole life. It's so hard. I was really up for the challenge, but I've realised how much I've bitten off now and it certainly won't be easy.

"I'm two weeks into training and I came into this with no background in dancing at all. It's a complete culture shock, but I'm really relishing the challenge and am excited to give it a go. It will be interesting to see how I get on anyway."

Carberry enjoyed nearly 17 years in the saddle before retiring in 2018 and hoped she would just get past the first week of the dancing show.

But after the mum-of-two's dazzling display, bookies Paddy Power make her the 15-8 favourite to win it.

New judge Arthur Gourounlian exclaimed: "Oh Nina, you are definitely the dark horse of the night, that was beautiful. You said you are not girly? I completely disagree. The only thing I will say, work on your upper body…relax more, enjoy!"

One tweeted: "Really rooting for Nina this year. She is such a genuine, lovely, hardworking gal. C'mon Nina you got this."

Another added: "You were terrific and looked soooo glamorous."

While her husband, Ted Walsh Junior, who is the brother of former riders Ruby and Katie and son of trainer Ted, said: "So proud of @ninacarberry brilliant at whatever she does."

Carberry is practising the rumba for the next round in front of a judging panel which includes Loraine Barry and Brian Redmond.

The programme is live every Sunday on RTÉ One at 6.30pm.

Kermadec stars amid ups and downs at Adelaide sale