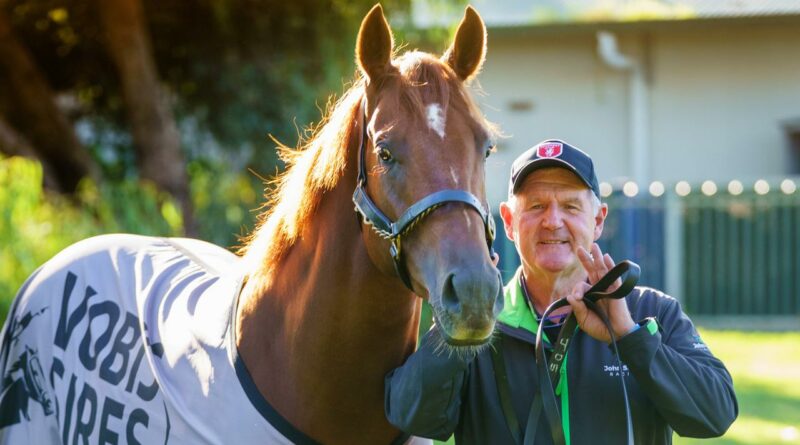 Trainer John Sadler has tempered the expectations on Starry Legend ahead of the $950,000 Showdown (1200m) on Saturday at Caulfield.

The unbeaten two-year-old Zoustar colt toyed with his rivals at Sandown and Bendigo, banking all-the-way 1000m wins, but Sadler said the jump in distance could leave him vulnerable.

“It is unknown and the manner in which he races suggests he could well be a query at the 1200 metres.”

Starry Legend on Wednesday opened $3 TAB favourite for the rich two-year-old feature, a hallmark of the Victorian Owners and Breeders (VOBIS) Race Day at Caulfield.

Despite the slight distance query, based on Starry Legend being able to settle in the run to finish strongly, Sadler still wants to make the most of the colt’s weapon – “raw speed”.

“You’d think at home on the track he’d be running through the bridle, but he’s not that type of horse at all,” Sadler said.

“He’ll go out and work and work in quite a measured fashion, work him with a mate and he’ll pop in behind … then go bang at the end of the gallop.

“Race day, when the gates open, he’s full on, you’re not going to change that in the horse.”

Arcaded, to be ridden by Jamie Kah, returns to Melbourne after a soft win in the Group 3 Magic Night (1200m) at Rosehill last start.

The Street Boss filly won twice at Caulfield, over 1100 metres both times, including the Group 2 Blue Diamond Prelude, before jumping awkwardly and struggling in the Group 1 Blue Diamond.

Starry Legend will be allowed to roll from barrier eight on Saturday in the hope of settling for regular jockey Michael Dee.

Dee has ridden the colt in both careers starts, and done most of the preparatory work on him.

“If he raced in the same manner as he did at Bendigo, I’d say over the 1200 metres he’d be in trouble,” Sadler said.

“He’s just got that really high cruising speed and he’s got it for 1000 metres.

“Whether he’s got it for any further we’re going to find out Saturday.”