He is still a maiden after 10 starts and half the field he faces today have already won a race, but three-year-old gelding Jungle Book can fly the local flag at today’s feature Wagga meeting.

Hard fit now, and seemingly ready to win well into just his second prep, Jungle Book lines up in a competitive Class 1 and Maiden Plate (race four) at set weights over the mile for popular Wagga trainer Trevor Sutherland. 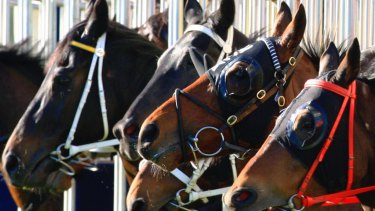 Wagga is the scene for today’s races.Credit:Jenny Evans

Punters can be reasonably confident the writing is on the wall. The son of boom American sire Animal Kingdom has been powering through the line from well off the speed all autumn, and looks beautifully weighted with form rider Blaike McDougall hopping back on after the pair went close three runs back.

Certainly, his last-start effort storming home behind Dictation this track and trip augurs well for today, and a possible shot at something bigger over the two-day cup carnival next month.

There is no shortage of rivals though. Lightly-raced Goulburn four-year-old Black Wand has consistent form and comes out that same race while Parliament and emerging Moruya three-year-old Dream Fields all have genuine claims.

Another heat of the competitive Wagga Stayers Series (race six) over 2000 metres brings together an open field in a Country Cup that threatens to be a real battle of tactical speed.

There is little doubt Canberra gelding High Dude will try to come over from a wide barrier and replicate his brave front-running effort at big odds in the Murrumbidgee Cup when only overhauled late by the smart Animalia.

But there is plenty of depth here and rivals who can run slicker closing sectionals, including Moruya four-year-old Pinch Passion and Albury visitor Shinseki.

At Santa Anita racetrack, 23 horses have died in the past three months

Gaby can produce that Loving feeling

Mark Newnham to enlist change of tactics for Miravalle