From a world bubbling with stress, endless sacrifice and cold, cold scrutiny, from a need to hear those cheers rattle down off the grandstands, to this.

A room cleared of any confusion.

Pat Smullen chats with the clarion tone of someone suddenly attuned to a line from Mitch Albom’s ‘The Magic Strings of Frankie Presto’; one reading: “The secret is not to make your music louder, but to make the world quieter.”

He sits in a hospital bed, hood pulled up on a grey tracksuit top to offset the bouts of shivering that still come sporadically, reminding his body of what it’s been through.

A large balloon, transposed with the faces of his children, bobs from a bedside locker. We are in the Hawthorn Ward on the fifth floor of St Vincent’s Private, charts at the bottom of the bed tabulating his recovery from six and a half hours of essentially life-saving surgery. The tumour on his pancreas has been removed.

When he heard they’d got it, Pat admits he cried. “This is the ultimate second chance at life,” he says now and those words aren’t chosen lightly.

Since hearing the cancer diagnosis on March 26, the co-ordinates of Smullen’s world have been rewritten starkly. They had to be. After an eternity of chasing winners, life narrowed and simplified with brutal suddenness.

And, in a perverse way, there may even have been some relief in that.

He’d had a sixth sense of bad news coming his way before he and Frances sat to be told the findings of that tell-tale scan in the Beacon.

It was a scan recommended by Dr Adrian McGoldrick, the Turf Club’s senior medical officer, Smullen having undergone multiple bouts of physio to alleviate an obstinate pain in his lower back. Now, in split seconds, all those years of wasting and stony obsession gave way to the most profound sense of human vulnerability.

Cancer. A six-letter word that visits most families at some point, yet one that isolates the patient like few others.

For months after the diagnosis, Smullen admits he kept side-stepping it. Denying it almost.

“It took me a long time to say, ‘I’ve got cancer,'” he remembers now. “It would be just ‘Oh, they found a tumour and we have to try and get it dealt with.'”

“Just the word is so… sure it’s frightening.

“It’s the one thing that everyone’s worried about coming to their door, isn’t it? Don’t get me wrong, I appreciate and know how lucky I am.”

The pancreas is a notoriously reclusive organ to get to and only months of chemotherapy and radiotherapy reduced the tumour sufficiently in size for surgery to become an option.

And the seven-month journey leading to that operating theatre made Smullen re-assess himself with unblinking candour.

The quiet tyranny of his profession had turned him into a person he didn’t entirely like. Nine times champion Flat jockey, winner of great marquee races like the Epsom and Irish Derbies, the Irish St Leger, the Champion Stakes, the Ascot Gold Cup and stable jockey to the great Dermot Weld since ’99. Yet always chasing something. Never sated.

“I think, if most sports people are true to themselves, there’s a huge amount of stress on you,” he says now.

“I mean I never felt I was performing as well as I should be. I never felt the results were good enough. I never rode enough Group One winners. This is all in my mind.

“I was pushing myself since I was 15, every single day. People might think I’m exaggerating, but I did. So, when I had to stop riding, it actually became a huge weight off my shoulders. And that was a big factor in how I approached the treatment. It gave me clarity in my mind. It gave me perspective on life.

“I think the lifting of stress was a big, big help to me. I just realised, if there’s one race that needs winning now, this is the one.”

In a previous chat, he’d told this writer of an inability to tune out of work, no matter the circumstance or environment. Of how losing a race could leave him “demented”. Turn him into “an anti-Christ”. He elaborates now. “I never had the mental strength to go on a holiday for a week or 10 days and put on a stone. So, after about three days on the holiday, I’d be starting to get irritated at putting on a bit of weight.

“So I’d start going to the gym on holidays, sweating while on holidays. That’s not a holiday. So, in theory, I’ve never had a holiday. I’m not giving out about the profession of being a jockey. But I have to be honest, it wasn’t helpful to me. No point in me lying in this bed now and not speak up about what was in my mind.

“The brutal rigours of being a jockey and trying to maintain weight… I’m sure it’s the same for boxers. Except the boxer might prepare for a few fights a year, we’ve to do it every day of the week.

“Every day you’re being judged and, realistically, you’re one bad ride away from losing your job. Make one critical error and lose a big race… we’ve all seen it before. It could be enough to lose the job. Like, that’s all in your mind.

“No matter how good you are, that has to be in the back of people’s minds somewhere.”

The cancer diagnosis, he reckons, opened him to a gentler, more rational existence. Smullen reckons it has made him a better husband and father, something Frances isn’t inclined to contradict.

Her own career as a successful trainer meant she always recognised implicitly that hard, solitary side to the life of top-rank jockeys destined to fight an endless fight with the weighing scales.

Essentially, Frances gave up her career so that Pat could commit utterly to his. It was, she says, a practical decision.

“His career was making money, mine was losing money,” she jokes now.

But Frances is long enough in the industry to know the serrated edge that obsession can apply to someone’s personality. How it pre-occupies them. Closes them even.

“You can see where marriages break down especially,” she says.

“I suppose girls would go out with jockeys because they think it’s kind of glamorous. Then you get married and I can see where a lot of marriages break down because of the reality of living with the wasting and the losing and all the stress.

“That they can just, sometimes, not be nice people. And a lot of jockeys… you can see they’re unhappy a lot of the time.

“I mean, I think Pat could have been described as borderline depressed for a good part of the last 20 years while he was riding.

“Actually, I think you’d find that to be the case with a lot of sports people if you were to delve into it.

“I mean the fact that he’s been more contented and happy in the last seven months or whatever, dealing with this… and much easier to live with… says a lot about what the stress of competing and riding can do to you.”

There is absolutely nothing to connect the strain of his professional life with the illness that came his way and Pat is keen to have that point emphasised.

Bad things happen to good people in every walk of life. And that’s simply the point in your existence that you need the gifts of strangers to come into play.

From the outset, McGoldrick was keen to see him put in the care of St Vincent’s where Smullen has been so grateful for the talents of men like surgeon Justin Geoghegan, oncologist Ray McDermott and radiotherapist Gerard McVey.

He has also been left hugely indebted to a nurse on the Hawthorn Ward he knows only as ‘Dee’.

Back in March, on his first night alone in Vincent’s after the diagnosis, she sat on the end of Smullen’s bed and, essentially, gave him a stirring motivational speech.

And it was as if it flicked a light switch in his head.

“She told me that we were going to get through this, that it was a path I was about to go down and there’d be no turning back…

“And, I don’t know, it just became embedded in my mind from that day to this,” he explains.

The positivity of that simple exchange re-iterates to Smullen the mistake he made as a race-rider in never buying into the appeal of sports psychology.

In a uniquely pressured environment, his way was always to self-help and, in many instances, suffer in silence.

“Probably the biggest mistake of my career,” he says unequivocally now.

“Look, I came from a working-class family. My dad was a very tough, hard man, played football for Rhode. He was a farm labourer and it was very much a case of, ‘Get up and get on with it.’

“And that was sort of my mindset. ‘Look, if you can’t deal with it yourself, you’re gone!’

“That was the ignorance of me and the naivety of me. And I’m sitting here now, looking back, thinking it was very, very foolish on my part. I should have seen a sports psychologist because I think it would have been very beneficial to me.

“Then this happens and I go from that mindset of never winning enough races to knowing that this was critical. I mean I knew how bad it was. And I’ve just gone about life in the last seven months in a different way to what I’d ever gone before. My real self came out over the last seven months.”

He has always had a faith of sorts, but this sickness made it keener.

Growing up in Rhode, he remembers the Rosary being said every evening at home and, like most of us, Smullen’s prayers have always, largely, been for the health of his family. “I’m not a great Mass-goer,” he says, “but I did always have a faith.

“And I can tell you, from March 26 this year, that faith came back to me very, very quick. I prayed very heavily to God, whoever God is, in the last seven months. And I just think he or she has reached out and given me a hand here.”

There are still, mind, many miles to travel here. If the dream is to get back race-riding, he and Frances recognise their days, for now, carry much plainer priorities.

He endured a few brutally tough days post-surgery, the only target in Pat Smullen’s mind through those days… that moment they all head to the airport for a holiday they’ve promised Sarah, Hannah and Paddy.

“I’m not going to break that promise,” he says now. “Whatever lies ahead for me, professionally or whatever, I’m happy to accept.

“If riding is not an option, in my own mind, I’m ready to accept that. I just want to see the kids grow up and live a happy life, the whole lot of us together.

“You can always want the big car and the big house, think you need to have them. ‘Oh, I worked so hard for it, I deserve it!’ But you know what? The simple things in life are what people need.”

Litt flies in to make a deep impact at Magic Millions 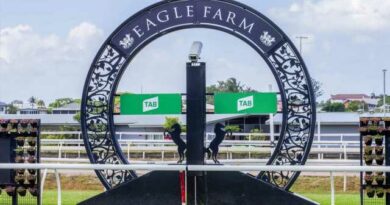