The filly made all of the running and was never passed as she triumphed at 12-1.

Loughnane also took the runner-up slot as Ffion finished second at 10-1, with Waliyak coming third at 9-1.

“I don’t even know what to say,” Pearson said.

“Hollie (Doyle) helps me so much, as well as Hayley (Turner), I can’t thank them enough for the amount of times they’ve given me a hand and it’s paid off.

“I had an absolutely lovely run, she bowled out, she’s been running over seven (furlongs) but Mr Loughnane said she’d want every stride of the mile.

“She bowled out, got into a lovely rhythm and just kept plugging on for me.

“It’s just unimaginable, honestly, I dreamt of it but I never thought it would happen.”

Plans to restrict field sizes to 12 when racing resumes 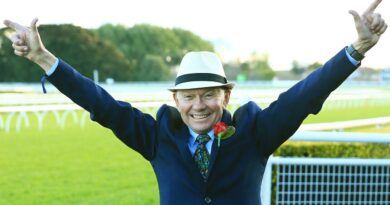