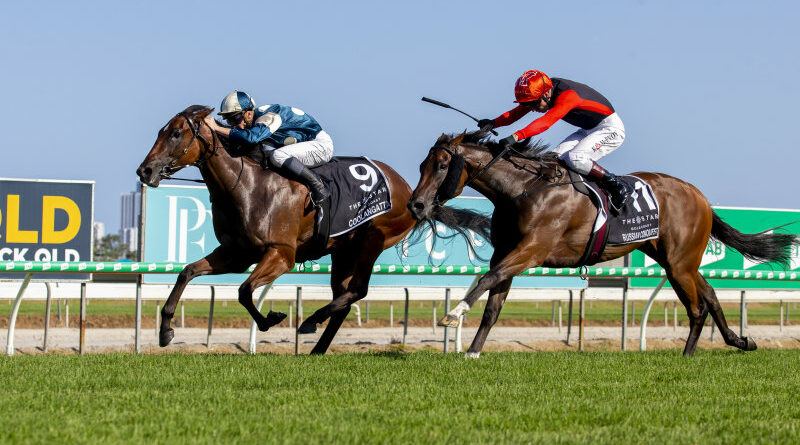 Trainers Ciaron Maher and David Eustace admitted they were nervous when McDonald made his winning move on the home turn after travelling on the speed, outside the main danger, Russian Conquest. 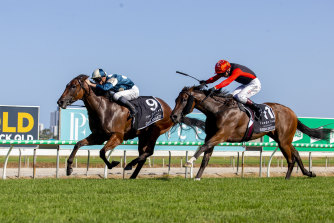 Coolangatta wins the 2YO Classic in 2022.Credit:Magic Millions Media

″⁣When he went I thought she is going to have to be good and tough,″⁣ Eustace said. ″⁣In the end it proved the winning of the race because the other filly just had too much to do. That’s what you get from J-Mac.

″⁣She has been at the top of our two-year-olds this season from early on and she just keeps stepping up. That was just a quality win. We will give her a couple of weeks off and get her back to Sydney for the Golden Slipper.″⁣

It was McDonald’s first Magic Millions and, like his Melbourne Cup and Everest winning rides, it could be used to train apprentice jockeys. Coolangatta bounced well from gate 13 and McDonald was able to get to the outside of Russian Conquest after 200m and pushed her to the fence. It gave him control and when he was coming to the turn, he played his winning card.

Coolangatta popped three wide and put a couple of lengths on Russian Conquest, who was left to have the final shot at the favourite.

Kerrin McEvoy on Russian Conquest followed Coolangatta and then launched at 200m but could only get within a long neck with Snitcat left 2 lengths away in third.

McDonald was full of praise for Coolangatta, which was one out, one back, before making her winning move and hitting the front on straightening.

″⁣She’s a special filly,″⁣ McDonald said. ″⁣The race played out perfectly, I got into the best spot possible and she does the rest. It was a great thrill to ride such a dominant favourite in the race. It comes with big expectations and I’m glad to be able to aid her with a nice ride.

″⁣I’ve ridden some nice two-year-olds and she’s definitely up there.″⁣

Maher and Eustace, who earlier won the Magic Millions Fillies and Mares with Snapdancer, are eying the Golden Slipper after choosing to send Coolangatta to Sydney at the beginning of her career.

″⁣What we do is send our best to Sydney to test them because you can’t have average ones there,″⁣ Eustace said.

″⁣She was that from the start and she stood up winning the Gimcrack and now the Magic Millions, and she can get better for the Slipper.″⁣

Peter and Paul Snowden might have had to settle for second in the two-year-old race but King Of Sparta gave them the Magic Millions Guineas with an explosive burst. ″⁣J-Mac just got the jump on us in the two-year-old but our filly [Russian Conquest] was still very good,″⁣ Paul Snowden said. ″⁣King Of Sparta has always been a horse that we thought could win a big race like this and today you saw the best of him. He has come back a lot stronger this time and he is going to run a good race in the autumn.″⁣

“He will back here next year, he obviously like the place,” trainer Greg Hickman said. “If you can win a race on this day every year it quickly adds up.“

While it has been a happy hunting ground for Eleven Eleven, Isotope righted the wrongs of 12 months ago in the Snippets.

Tony Gollan’s special sprinter has won six of her 11 starts and was first-up for nine months after nearly dying from colic in Sydney last April. She has matured in her time off and might be returning to taking on the best sprinters in the country later in the year.

″⁣We’ve ridden some highs with her and then the lows like Magic Millions day last year,″⁣ Gollan said.

“Things started to get back on track in Sydney and then she nearly died on us so to have her back here today is a little bit of justice for last year. ⁣You’ll see her in Sydney in the autumn, I can’t wait to take her away again.