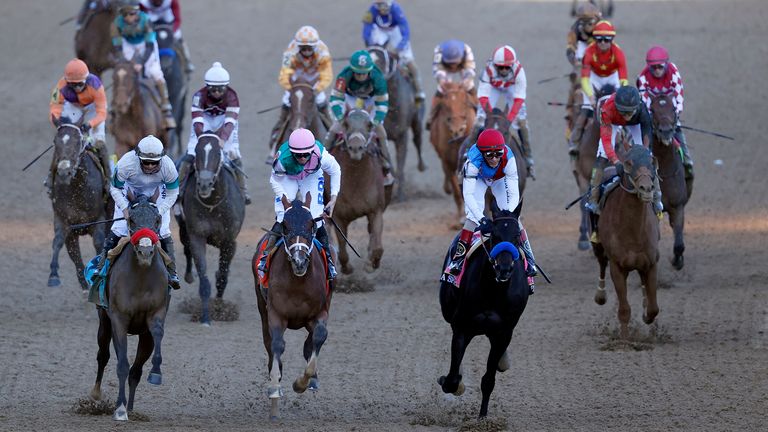 On a colt that cost just $1,000 as a yearling in 2019 and $35,000 to his current connections last year, Velazquez was masterful from the front – just as he was in the Covid-delayed renewal in September aboard the Baffert-trained Authentic.

With a crowd of 51,838 in attendance at Churchill Downs, Soup And Sandwich and Mandaloun were never far away, with favourite Essential Quality also having a smooth trip.

The latter made his move rounding the home turn in the hands of Luis Saez, as Hot Rod Charlie also joined the fight.

But in almost a repeat of Authentic’s win when Tiz The Law looked like going past, Velazquez had judged everything to perfection and his mount answered every call to hold off Mandaloun. Hot Rod Charlie was third and Essential Quality fourth.

Baffert – who had been forced to rule the exciting Life Is Good out of the race following a setback – told NBC Sports: “I knew he was training well, but I’m really surprised – when I saw him on an easy lead, I kept waiting for these horses to come at him.

“But Johnny had him in the perfect spot and if you have him on the lead he’ll fight. When those horses came to him – I cannot believe he won this race. This little horse, that’s him – he was all guts.

“I’m the luckiest guy in the world. I’m so spoiled bringing these heavy-duty horses in here, but that little horse he’s got a heart, such a big heart.

“It hasn’t sunk in yet (setting new record), I love the record but it’s one of those things – I’m so thrilled, you just never know if you are ever going to be back. It’s so difficult.

“To win a seventh – we stay focused and working at it. I couldn’t be prouder of my team. But that little horse, he won it today, he doesn’t know how much he cost. You know what, what a little racehorse – he was all racehorse today.”

Victory capped a tremendous two days for the masterful Velazquez, who landed the Kentucky Oaks on Friday night with Malathaat.

Winning the Derby for the fourth time, he said: “There’s no words to describe it – what an incredible feeling, this doesn’t get old.

“I said to Bob we’re going to put him on the lead and see what happens and I think he’s the horse to beat. It worked out.”