Home » Horse Racing » Melbourne Cup: One final kick in the guts for Victoria as empty Flemington set to favour visitors

Locals have been banned from attending the Melbourne Cup in a move that has left more than a few visitors smiling. 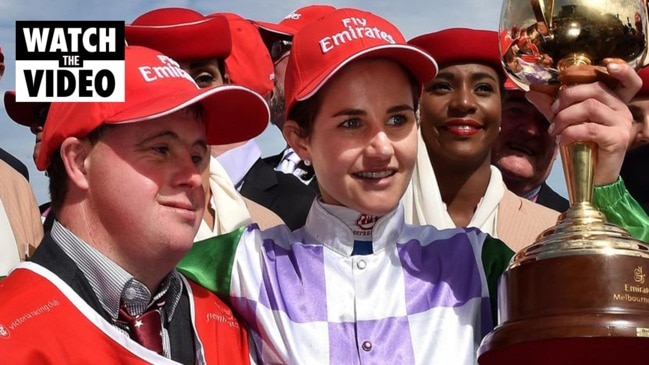 Local racing fans have been banned from attending the Melbourne Cup in a move that has left more than a few visitors smiling.

Today’s edition of the race that stops a nation is going to be unlike anything we’ve ever seen as the $8 million dash plays out in front of empty grandstands.

Victoria has been hit hardest of any state in Australia by the COVID pandemic and in one final kick in the guts the absence of a crowd at Flemington is set to hand a huge advantage to the international raiders looking to continue their dominance of the event after Vow and Declare’s win for Australia last year.

You can read why in our live coverage below, which will feature the results of every race on the card, track all the late movements in the betting markets ahead of the big one and cover all the colour from the pubs and streets of Australia.

If you’re still looking for a winner, here’s our comprehensive runner-by-runner guide, if you need a free downloadable sweep you can find it here, or if you’re just up for a laugh, check out these revealing photos from previous years.

They're already considered two of the best chances to win the race and Anthony Van Dyck and Tiger Moth can go about their business in relative peach and quiet.

Melbourne Cup-winning jockey Corey Brown, who has backed Anthony Van Dyck to win the race, said the empty racecourse was a huge advantage for the international raiders.

"This goes for all the European horses – they’re getting a big benefit from the fact there’s no crowd," Brown wrote for foxsports.com.au. "Quite often they can get very stirred up by the big atmosphere on Cup Day, and can lose their race before it’s run. That won’t be the case for the Covid Cup."
Six-time Melbourne Cup winning owner Lloyd Williams agreed, saying it would be of extra benefit to inexperienced horses like betting favourite Tiger Moth.

“They’ve played into his hands this year. There’s no crowds there, so for an inexperienced horse he’s not going to face 100,000 people in the mounting yard," Williams told RadioTAB.

“If (jockey Kerrin) McEvoy gives him a good ride, he’ll be hard to beat. I’d love to own him.

“Provided nothing goes wrong with this horse over the next 12 months, you’ll hear a lot of him.”

After a tight lead-up where a handful of horses couldn’t be split, punters have spoken and now have a clear favourite in the Melbourne Cup.

Tiger Moth blew out from $6.50 to $9 when the barrier draw was revealed, but the Irish raider has since bounced back into punters’ good books and is the shortest-priced favourite in the race at $6.50.

Anthony Van Dyck was the favourite for most of Sunday night and Monday morning but has pushed out to $9.50 and Surprise Baby is now second favourite at $9.

Racing expert and presenter Francesca Cumani agreed, saying he is “impossible to ignore”.

“He will have plenty of supporters in the Cup because he has the ideal profile of being a lightly raced northern hemisphere three-year-old with a good VC and light weight (52.5kg),” she said.

He’s not among the top contenders but the other big mover in the market is Twilight Payment, who has shortened from $41 to $21 and is currently Ladbrokes worst result.

But our expert is tipping a local win, which you can read about in our comprehensive runner-by-runner preview which includes a predicted first four and the best betting strategy for spending $100 on the race.

Arsenal legend Gilberto Silva gives verdict on Mikel Arteta’s time as manager
We and our partners use cookies on this site to improve our service, perform analytics, personalize advertising, measure advertising performance, and remember website preferences.Ok