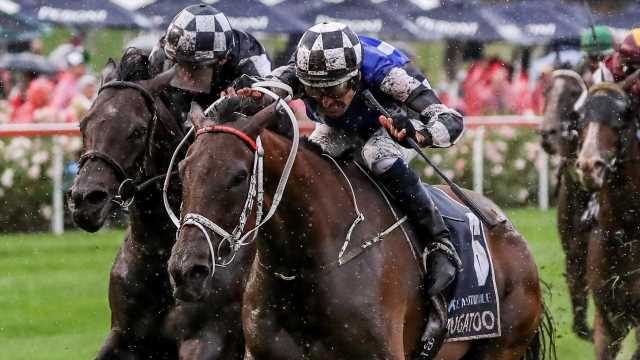 Mugatoo, who has burst into the world’s top 10 rankings, will revive memories of the great Sunline if he wins the $3 million The Star Doncaster Mile (1600m) at Royal Randwick.

The Kris Lees-trained Mugatoo is trying to become the first topweight to win the Doncaster since Sunline shouldered 58kg to win in 2002.

But even Lees admits Mugatoo has “beaten the handicapper” when he carries 56kg in Saturday’s big race.

“I’m sure if the handicappers could have another go at Mugatoo, he would probably get an extra 2kg,’’ Lees said.

“I think both Mugatoo and Avilius (56kg) are both in pretty well at the weights.’’

The classy Mugatoo is the $4.20 favourite to win the famous Randwick mile and confirm his status among the world’s elite racehorse.

Mugatoo has vaulted into the Longines World’s Best Racehorse rankings released overnight at No.10 with a bullet after his win in the All-Star Mile at Moonee Valley last start.

Champion jockey Hugh Bowman produced a masterclass on Mugatoo that day and he has formed a great combination with Lees over the years.

Both men were really only establishing their successful careers when Bowman won the 2005 Queensland Oaks on the Lees-trained Vitesse Dane.

“We go back a long way and we work well together,’’ Lees said.

“Hugh is champion jockey, he has always been one of our first picks for the right horses.

“I know Hugh really likes Mugatoo, he has ridden the horse a couple of times and his confidence has grown each ride.’’

Lees is also growing in confidence that Mugatoo will prove hard to beat in the Doncaster Mile.

“I can’t fault his preparation for a race like this,’’ Lees said.

“The four weeks between runs has worked in his favour, too.

“The fact we have a bit of give in the track will be ideal for him and he’s drawn a good barrier (four).

“It is a Doncaster, luck in running plays a big part, but he should be able to find a nice position.

“There is a fair bit of speed out wide but he normally leaves the gates pretty ‘clean’ and I think he can settle in the front half.’’

Lees nominated Avilius and Think It Over as the hardest to beat while confirming there is a very real possibility Mugatoo will back up in the $4 million Queen Elizabeth Stakes (2000m) at Royal Randwick next Saturday.

■ Happy Clapper, winner of the 2018 Doncaster Mile, will lead the Doncaster field into the Theatre of the Horse at Randwick.

Happy Clapper lives in retirement with nearly 100 other ex-racehorses at Racing NSW’s Bart’s Farm near Castlereagh.

“We considered a few options for Happy Clapper but settled on Team Thoroughbred NSW because we knew he would be looked after and loved forever,” trainer Pat Webster said.

“He’s got his own place in the history books as the only horse to have ever won The Doncaster, The Epsom and The Villiers and he deserves to be celebrated. We’re so proud of him and couldn’t be happier to see him out and about where people can continue to appreciate him.”

BHA working on getting owners back on racecourses 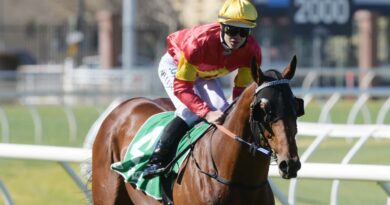 Baker and Bullock the ones to follow at Mudgee Sunday