Trainer Mark Newnham is hoping connections of Super Pins are rewarded for their patience when the gelding makes a belated debut at Gosford on Thursday.

The three-year-old was purchased at the same breeze-up sale Newnham secured the smart youngster Deep Sea but some 12 months before. Deep Sea has already raced twice, so it’s been quite a waiting game. 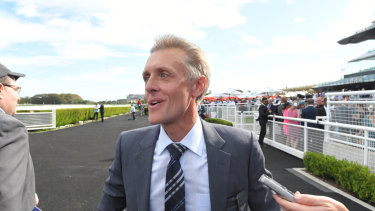 Long wait: Trainer Mark Newnham has had to bide his time to get Super Pins to the races.Credit:AAP

But the wait will be over when Super Pins carries favouritism into his debut in the Konami Handicap (1000m) on the back of a couple of nice trials.

“He’s always showed above average ability and it’s the right race to start him off in,’’ Newnham said.

Super Pins had his first barrier trial back in August and is effectively in his third preparation. The latest of his two trials was a closing second over 1050m on May 6.

I wanted to run him in a 1000m race and get him to relax because he does things in a bit of a hurry.

Newnham expects jockey Tommy Berry to be able to control his own destiny on Super Pins from barrier two.

“If we’d drawn wide we’d probably have to rush forward, and that’s what I wanted to avoid.

“He’s got good natural pace, but my issue has been trying to teach him to settle. I wanted to run him in a 1000m race and get him to relax because he does things in a bit of a hurry.’’

There’s a blueblood among Super Pins’ rivals in Godolphin filly Accoutrements, which also steps out for the first time.

Meanwhile, Newnham scratched the shortest priced favourite of the day, Shadow Hero in race two, to send him to Brisbane for a listed race on Saturday after he drew ideally in barrier one there.

“It was always my preference to go up there. I just wanted to see the make-up of the field,’’ he said.

Ryan Moore off mark for new season at Kempton 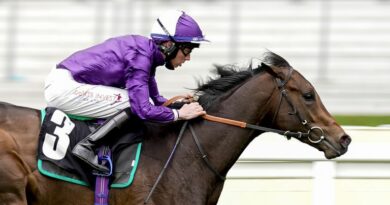