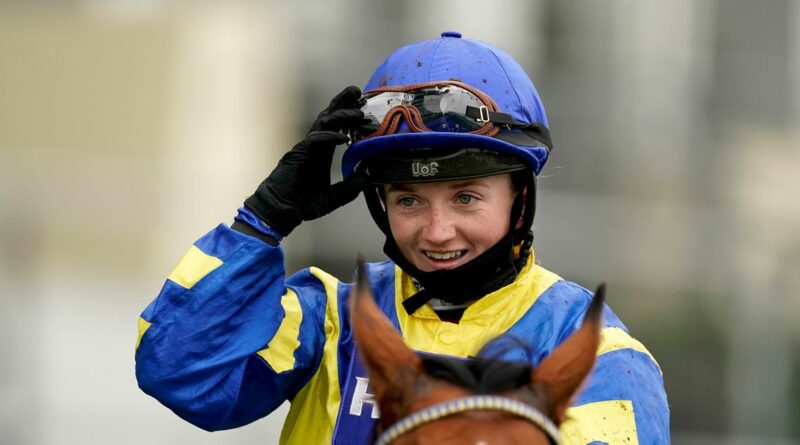 Hollie Doyle's mount in the feature ran away with the Long Distance Cup on Ascot’s QIPCO Champions Day and looks ready for the marathon trip.

The selection is a great price to overturn the market leader at odds of around 9-2.

CADAMOSTO is fancied to follow in the prints of his father, No Nay Never, who won this race eight years ago.

The Aidan O’Brien-trained youngster made his debut against eight rivals in a five-furlong maiden at Dundalk in April,

Sent off the 7-4 joint-favourite, Ryan Moore’s mount made most of the running before lengthening clear in the closing stages to beat Silver Surfer by three and a half lengths.

That was a most promising start and, with a large chunk of improvement anticipated from first two second outings, Cadamosto can give his stable a third Norfolk Stakes from the past seven runnings, and a fourth in all.

No Nay Never’s trainer Wesley Ward saddles the respected pair Lucci and Nakatomi, while a bold show from the experienced Navello would be no great surprise.

MOHAAFETH, an 11th-hour defector from the Derby on account of the rain-softened ground at Epsom, should gain compensation.

The forecast of overnight thunderstorms certainly presents a headache to the connections of a colt who was 6-1 second favourite before downpours scuppered his bid for the colts’ Classic.

If trainer William Haggas deems today’s playing surface suitable, it’s hard to look beyond the son of Frankel, who has taken a step forward with victory in three starts this season.

Most recently, Mohaafeth cantered all over his rivals for a five-length supremacy from Secret Protector in the Listed Newmarket Stakes on the 2,000 Guineas undercard.

He stays at 10 furlongs here, and a challenge for the top-leve Coral-Eclipse Stakes at Sandown Park is next if things go to plan this afternoon.

Movin Time looked capable of dealing with a step up in class when scoring at Newmarket on his return and can make the podium, along with Guineas and Derby sixth One Ruler.

ESHAADA comes to Ascot having bypassed the Oaks – and that could prove an advantage.

The Roger Varian-trained daughter of Muhaarar – dam Muhawalah was a winning sister to dual Group 1 winner Tamayuz – made her debut in a maiden over Nottingham’s extended mile last November, and showed plenty of promise for the future with a neck margin over Quenelle D’Or.

Eshaada was sent off at 18-1 when her sights were raised for the Listed Fillies’ Trial Stakes over a mile and a quarter at Newbury last month.

But Jim Crowley’s mount belied her outsider status with a neck success from Gloria Mundi, with Aristia third and Twisted Reality back in fourth.

Her style of running suggests my selection will thrive for an additional two furlongs here and Eshaada gives the strong impression she has plenty more to offer on the third outing of her career.

Trainer Alan King, a leading light in National Hunt circles for two decades, has sought to develop the Flat side of his operation.

And in Trueshan he has a five-year-old capable of capturing one of the British summer’s most cherished prizes.

The son of Planteur announced his arrival in the stayers’ big league when combining with Hollie Doyle for a seven-and-a-half-length margin in the Group 2 Long Distance Cup at Ascot last October.

The pair lost their unbeaten record together – they were 3-3 previously – when Trueshan went under by three-quarters of a length to Japan in the Group 3 Ormonde Stakes at Chester last month.

But the runner-up was conceding 5lb that day and, with the iconic two-and-a-half-mile trip expected to trigger further progress, Trueshan can write his name on the Gold Cup roll of honour.

Stradivarius put behind him a trio of defeats last back end with a return-to-action one-length score from Ocean Wind in the Group 3 Sagaro Stakes here in April and is not passed over lightly.

RAADOBARG continues to go from strength to strength in 2021 – and there is more to come.

After landing a quick-ground novice stakes at Leicester in April, the Roger Varian trainee doubled up in a similar event on much slower terrain at Thirsk the following month.

Raadobarg then made his handicap debut in Haydock Park’s Tote Silver Bowl 26 days ago and travelled with menace before beating Seasett by a length and a quarter.

He has gone up 11lb in the weights, but Raadobarg is a long way from the bottom of the barrel and another good account is on the cards.

In a race of myriad possible outcomes, and Mithras, Air To Air, Qaader and Liffey River are just four others capable of having a say in proceedings.

SUREFIRE proved well ahead of the assessor on his handicap debut – and there is plenty more where that came from.

Beaten by Siskany in a novice stakes Windsor in April, Surefire competed from a British Horseracing Authority rating of 82 at Leicester 10 days ago, and laughed at that mark with a three-and-a-quarter length victory over Otyrar.

Under a 6lb penalty, the Ralph Beckett trainee is 3lb well in – he will race off 91 in the future –and the additional two furlongs should also be of benefit to Hector Crouch’s mount, who has barely scratched beneath the surface.

The field is replete with going-places three-year-olds, and Sir Lamorak, Nagano, Military Mission and Just Fine are the quartet at the top of a long list of dangers.

SYMBOLIZE is capable of a bold show at rewarding odds as he bids to make it third time lucky at Royal Ascot.

Fourth in the Windsor Castle two years ago and third in the Jersey Stakes in 2020, Andrew Balding’s son of Starspangledbanner has plied his trade in seven-furlong handicaps on both starts this season.

David Probert’s mount, running on the back of a 178-day break and a gelding operation, didn’t get the gaps when second to the progressive Double Or Bubble at Newmarket’s Craven meeting in April.

Symbolize was also denied the rub of the green in the Victoria Cup over course and distance last month, having to wait for a run and losing a shoe in returning 11th behind River Nymph, but better is expected today.

In a tricky close to Thursday’s proceedings, Blue Mist and Persuasion are names worth throwing into the mix, along with Volatile Analyst and Danyah.

The Storyteller stars for Gordon Elliott at Punchestown 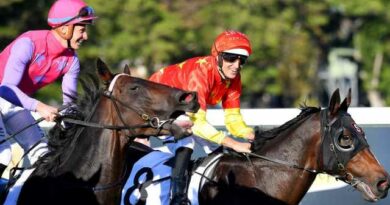 Hugh Bowman and James McDonald in the clear after police interviews