Racing Minister Martin Pakula has told the Victoria Racing Club that owners will not be allowed on course during Cup week, despite comprehensive submissions from the VRC outlining how it could safely host up to 1000 owners on course for each of the four days.

The state government last week announced that up to 500 owners would be allowed to attend the Cox Plate carnival at Moonee Valley, but backflipped on that decision within hours following community backlash. 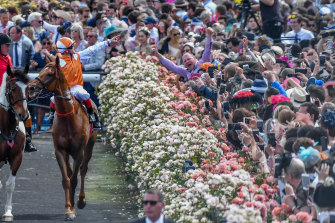 "The four days at Flemington will enthral racing fans and the Melbourne Cup will, as always, stop the nation.

"We wish the Victoria Racing Club and owners all the best for the carnival."

Speaking at a press conference on Wednesday, Pakula said the decision had more to do with community sentiment than safety.

"It's not a question of whether or not it was safe. In a place as large as Flemington, of course there's a conceivable way you can safely have a number of people at Flemington.

"The VRC are understandably disappointed but they accept it.

"It's been a long road for Melburnians, for Victorians but even longer for Melburnians … and the view the government came to was it just wasn't appropriate in all of the circumstance to have hundreds of owners congregating at Flemington.

"There will be a time for that, but next week is not that time."