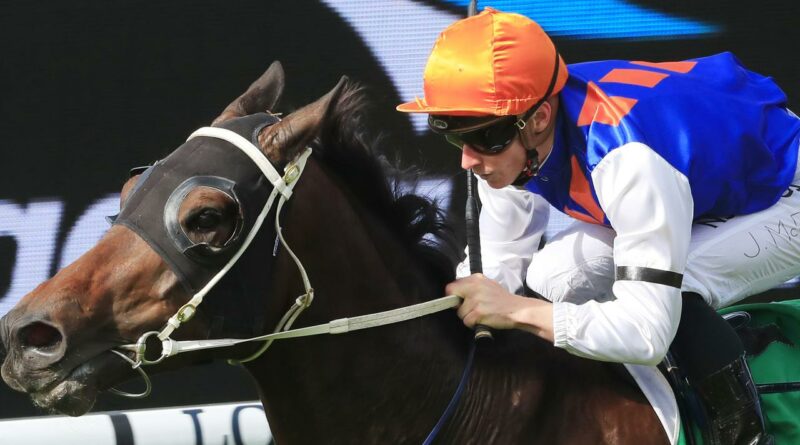 The strongest horse will win Sunday’s $150,000 Country Championships Qualifier (1400m) at Nowra and really earn its way into April’s $500,000 final at Randwick.

That’s because wet weather will make things testing and that’s not a good sign for a few horses who haven’t won past 1200m.

“There’s a few in there that haven’t run the trip and there’s a couple there that will be calling for a cab before they turn for home,” trainer Joe Cleary said. “It will be survival of the fittest and if the rain comes it will feel like a mile race. It will separate the men from the boys.”

Rothenburg is ready to peak in the Country Championships Qualifier. Picture: AAPSource:AAP

The Queanbeyan trainer has two chances in Sunday’s big race with Rothenburg leading the charge. He’s a fairly new edition to Cleary’s yard and has had two solid runs at 1000m and 1300m and a trial since to get him ready to peak in the qualifier.

He has drawn barrier 13 but that’s not a worry for jockey Blaike McDougall or his trainer.

“It doesn’t bother me now that the rain has come and if the emergencies don’t start he’ll jump from barrier 10,” Cleary said.

“He’ll be in the second half of the field and if the weather forecast is true it could be a Heavy 10 and we’ll be coming home down the outside fence. His work during the week with Girls Are Ready was simply outstanding and he’s telling me he’s ready to go.”

Girls Are Ready, like Rothenburg, will enjoy Sunday’s track but will come into the race if the rain falls in the lead up to the event.

“On a Heavy 10 she’ll be a cheeky chance at massive odds but it needs to be really wet,” Cleary said. “On top of the ground. Rothenburg is superior to her.

“A lot of people forget that she’s a three-time city winner who has been in Group 1 races and Magic Millions races and she’s probably a little underrated.

“She needs everything to go right and putting Jess Taylor on could be a major positive because she knows her so well and rides her so well.”

Girls Are Ready will be a cheeky chance if the Nowra track is very heavy. Picture: AAPSource:AAP

Girls Are Ready came from 12th to run seventh on the Gold Coast last start and drops 3.5kg in weight for this race.

She’s won at the trip and the removal of blinkers recently has benefited her.

“She was tardy out of the barriers so I tinkered with some gear,” Cleary said. “Luke Currie gave her a good rap after the Gold Coast and said ‘leave the blinkers off her’.”

Cleary’s two runners both tick the wet track and 1400m boxes so they’ve got an advantage over most. But which is the one to beat?

“It’s a strong race,” Cleary said. “I’ve got a very healthy respect for Exotic Deel. I think Nick (Olive) had tabled this race for her and her run the other day was very good.”

“Art Cadeau, from barrier two, could end up in a little sticky situation but he’s got Tommy Berry on his back. Those are the main dangers but there are no excuses for mine.”

When Leg Work is on song he generally wins and Danny Williams is sure he’s got him ready to run the race of his life in the Country Championships Qualifier (1400m) at Nowra.

Leg Work beat race favourite Art Cadeau last May over 1400m and two of his three wins have been on heavy ground. And he expects the pace to be a cracker.

“There will be a bit of speed and pressure because there’s a couple of 1000m horses in there trying 1400m for the first time so they’ll naturally go forward.

“They won’t die trying,” Williams said. “He’ll appreciate the heavy track that we’re anticipating so that won’t be a problem. We’ve beaten the favourite already in a Highway and I think he’ll run pretty well.”

Leg Work goes into the qualifier second-up having run fourth at Goulburn in a 1300m race. He finished just behind Rothenburg that day and they meet again on Sunday.

Leg Work has won and run second at his only two second-up runs and Williams said he’s as good as ever ahead of his biggest day.

“He’s come on since his last run and he had a jump out on Monday and it was as good as I’ve ever felt him,” he said.

“He was good in his last run and if he didn’t have to come around the heels of other horses he probably would’ve won. He’s improved immensely since that run so there’s a lot of positives going into this.”

The first two over the line on Sunday will head towards the Country Championships Final (1400m) at Randwick in early April. The Shamus Award five-year-old will start from the outside barrier with Sam Clipperton on board.

Leg Work has a good turn of foot in the wet or dry. Picture: AAPSource:AAP

The Group 1-winning rider will need to be at his best on Leg Work and will likely have to weave a path in the straight. But the fact he’s drawn out means he can find the better part of the Nowra track as they all look to get out wide to make their runs.

Williams said Leg Work had an ace up his sleeve.

“He is a horse that’s got a good turn of foot on the wet or dry and you don’t have to panic on him,” he said. “He’s not like most horses where you’ve got to get him to the outside to get some momentum. He can sprint a quick 200m.

“The plan will be to ride him for luck and we’re not worried about the barrier because when it’s wet they all want to get out wide at Nowra.”

Williams also runs Pedway in the last race on the day over 1000m after running second last start in a Benchmark 80 at Wagga Wagga.

Facts and figures suggest he is the best horse in the Qualifier. Wet is no concern, drawn well, Tommy Berry, last-start winner — easy to like.

Lightly-raced and talented. The Another One/Zardoro form reads very well for a Class 2 Plate.

First starter from the Bjorn Baker camp. Half sister to eight winners, trialled like she will be number nine for mum.

TOMMY BERRY will be the punter’s pal this Sunday if he can do his bit to see Art Cadeau win the Country Championships Qualifier.

Torinda is a Joe Pride first starter who has trialled well. Trivia time: this horse’s fourth dam is Anntelle who started 500-1 on debut for Tommy Smith no less. Torinda is a fair bit shorter but rightly so off the trials. Willy Wilson is a 21-start maiden but has placed 8 times and is getting closer to a win. Genkides ran a good horse to a half-length at Scone last start.

More Excitement is a half-sister to Red Excitement and certainly caught the eye on debut at Goulburn coming from a mile back to finish fifth of 13 just 2.8 lengths from the winner. Extra 200m is a gift. Miss Keira likewise made up plenty of ground in a mile race on a Heavy 8 last month. Go well here. Savabeel filly Amore is way down in ‘class’.

Garros is a very adept wet-tracker. In fact, he runs his best races when it is heavy. Stuck to his guns in the most genuine fashion when he was fourth in a Cup race at Sapphire Coast last start. Very fit! Kentucky Award has only won 2 from 20 but is racing really well this prep. Can easily figure. Last-start winner Club Legend is 5 starts 2 wins, 3 seconds on heavy tracks.

Highway veteran Zardoro earned himself a richly deserved win at Sapphire Coast on January 31 when he beat handy types Capy Pan Boogie and Quiano Queen on a Heavy 8 track. Has a big weight but it is a 55kg minimum. Spectrometer is the X-factor; lightly-raced, clearly handy and has trialled OK for this. Market best guide. Salome is a player.

Asserting is a first starter from the Bjorn Baker stable. The filly is a half to eight winners including multiple stakes winner Canali. Has run third in her two trials — both a long time ago so the flucs will be crucial. Argyll Gardens ran 5th of 7 beaten 6 lengths in her trial but actually went very well. Respect. Pocket Missile is a much better horse than her form reads.

Clay Pan Boogie is a Jason Ponsonby-trained gelding who is building quite a tidy CV with a win and four placings from his six starts. The son of Jet Spur’s career highlight was a third in a Highway to Another One but he was pretty impressive chasing Zardoro home last start, too! Danzadel is an up and comer by Cox Plate winner Adelaide. Smashing ride to win at Sapphire Coast but she showed so much desire herself. Tickler’s best is good enough.

Art Cadeau was second favourite with the TAB to win the Country Championships Final at HQ on April 3 before the first heat was run at Coffs on Saturday. It is not hard to see why given he has raced nine times, won three and was runner-up at the other six. Loves the slop, is as honest as Abe Lincoln and has Tommy Berry up as usual. Could be a Terry Robinson clean sweep here with Lady Demi on her way to the final. She has done enough in Highways as such to suggest she is as good as any of these others and better than most. Leg Work is a very good wet-tracker and peaks now second-up. Rockarosa is a huge contender.

Blazing Mac is a Joe Pride-trained mare by the ultimate wet-track sire More Than Ready out of the James H B Carr winner Stellamac. Has the ‘form’ to win, can’t say the trial was anything to write home about but it was on the synthetic so you never know. Pedway is almost always competitive and has a claim to offset the weight. Noble Soldier has run once on a Heavy track at Nowra and was beaten a nose. 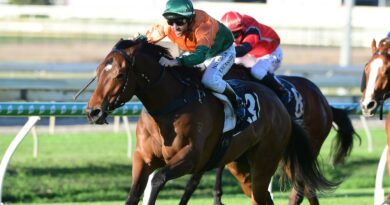 Trainer hoping to be closer in the run with talented gelding

Everest field set to look very different this spring – who are the contenders to join Nature Strip?