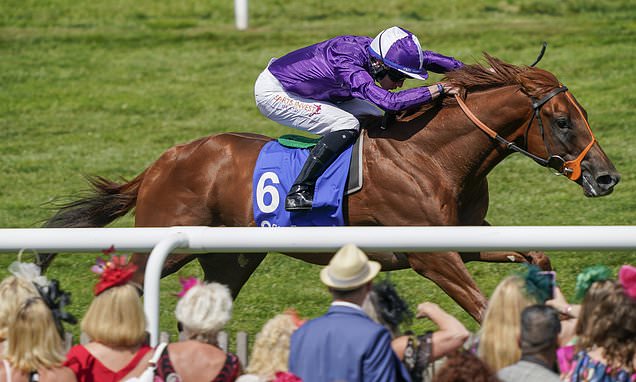 Richard Hannon will be disappointed if Persian Force doesn’t avenge his Royal Ascot defeat by Bradsell as they meet again in a red-hot edition of the Group One Keeneland Stakes at the Curragh.

Rossa Ryan’s mount was beaten by a length and a half by Archie Watson-trained, Hollie Doyle-ridden Bradsell in the Coventry Stakes, a race which looks even better after Royal Scotsman romped home in the Richmond Stakes at Goodwood last week.

Since the royal meeting, Persian Force produced an improved effort to win the July Stakes at Newmarket and he will probably have to step up again to come out on top in a line-up which also includes Aidan O’Brien’s Windsor Castle Stakes winner Little Big Bear and his stablemate Blackbeard, who won the Prix Robert Papin at Chantilly. 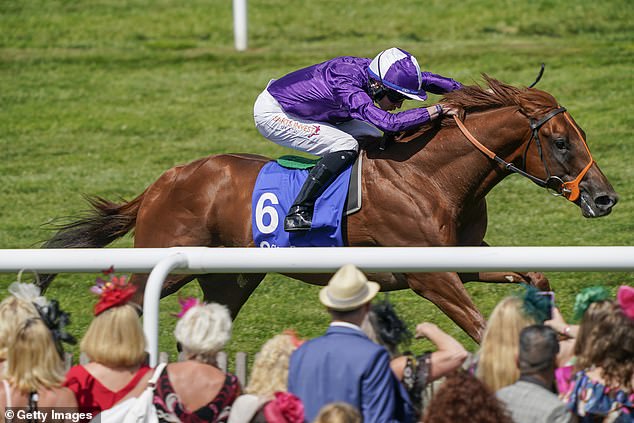 Hannon, whose father Richard snr won the race in 1992 with Frankie Dettori-ridden Pips Pride, said: ‘It is the best two-year-old race for years. It going to be exciting and I will be disappointed if we don’t win. It will take a top drawer horse to beat Persian Force.

‘He is the best two-year-old I have had for a lot of years. He has grown and come on big time since Royal Ascot. The July Stakes has done his confidence a lot of good, he is moving like a dream and couldn’t look any better.

‘Bradsell won well at Ascot but they did race away from each other. I wouldn’t be going there if I didn’t think we could reverse the form but there is more than him to worry about.’

That also includes Johnny Murtagh-trained Shartash, who had to be brave to grab the gaps when beating Blackbeard by a short-head in the Railway Stakes at the Curragh in June. 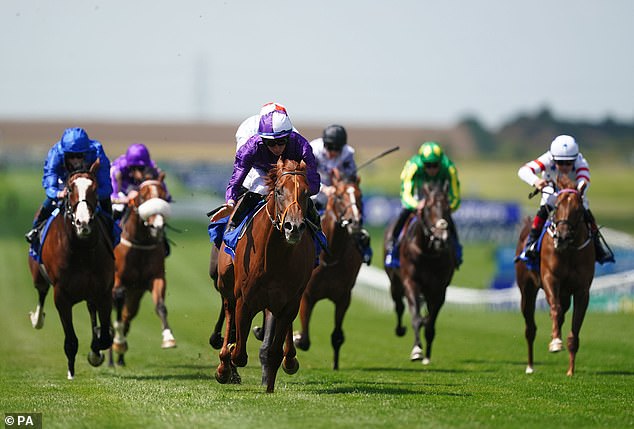 The Richard Hannon-trained horse (middle) is in ‘the best two-year-old race in years,’ he says

The outcome of the six-furlong prize will have an influence on the ante-betting for next season’s 2,000 Guineas and potentially on which colt will ultimately be crowned champion 2022 two-year-old.

O’Brien has won the race a remarkable 17 times, including victories with two of his future 2,000 Guineas winners – Johannesburg and George Washington.

The attention will be even greater if Bradsell can maintain his unbeaten record, cementing hopes that he could potentially be a contender to give Doyle a first British Classic win to follow her success in this season’s French Oaks (Prix de Diane) on Nashwa.

Watson has issued positive bulletins on Bradsell, who he has described as the ‘best I’ve trained in terms of what he’s done on the gallops’.

2000 Guineas winner Kameko is unlikely to be risked at Ascot