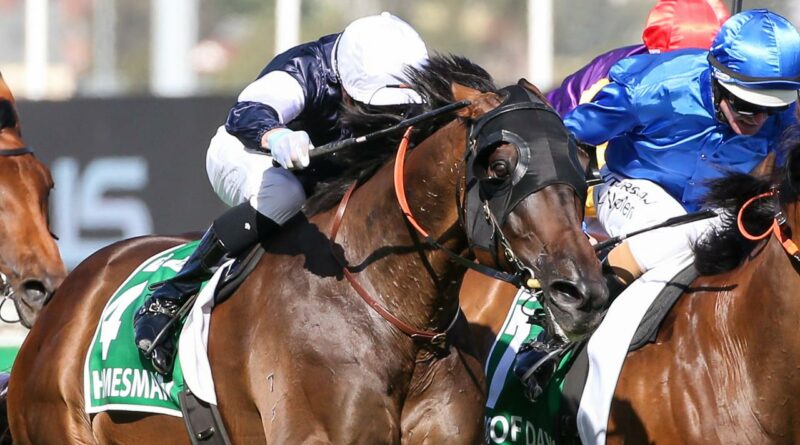 Beating emerging star Zaaki is the toughest task in Australian racing on Saturday.

Zaaki has stamped himself a contender for the big spring events with a pair of dominant wins in Queensland, including a seven-length romp in the Group 1 Doomben Cup.

TAB has posted Zaaki as $1.50 favourite to continue his winning run in the Q22.

But Victorian training partners Anthony and Sam Freedman have accepted the challenge with three runners in Saturday’s $1.5m The Q22 (2200m) at Eagle Farm.

However, Sam Freedman said an improved Zaaki was likely to prove too good for his opposition on Saturday.

“He’s going to be very hard to beat if he turns up in the same form he did in the Doomben Cup,” he said.

“We’re under no illusions that, if he produces that again, we’re probably racing for second.”

The pair will run Group 1 winners Homesman and Warning along with import Le Don De Vie in the race formerly known as the PJ O’Shea Stakes.

Warning (right) is the Freedmans’ leading chance in the Q22. Picture: Trackside PhotographySource:Supplied

Warning is the shortest of the trio in Q22 betting at $13.

Warning posted his first win in 18 months when successful in the Group 3 Chairman’s Handicap at Doomben last start.

The gelding has also trialled at the Sunshine Coast since his win.

“Warning has been targeting this race since the Australian Cup and everything has tracked pretty well going towards it,” Freedman said.

Le Don De Vie is a $26 chance in early Q22 betting while Homesman is a $34 chance despite winning the Group 1 Australian Cup three runs back.

Homesman produced an improved effort when third in the Group 3 Lord Mayors’ Cup last time out, showing the stable the seven-year-old was ready to produce a big run.

“He’s probably just about ready now, third-up since the Australian Cup, he might be ready to peak.”