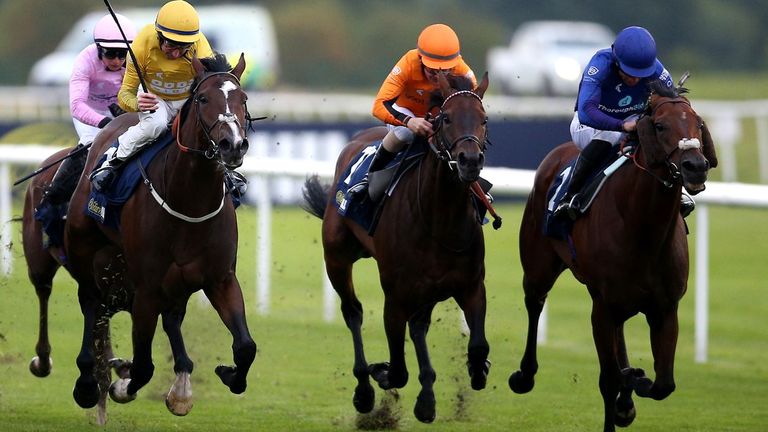 Sky Sports Racing’s senior analyst Jamie Lynch casts his expert eye over the key runners for the Racing League title contenders ahead of the final meeting at Newcastle on Thursday.

Two teams are clear, but the overall competition is most definitely a three-horse race, because Team ThoroughBid (321 pts) and Goat Racing (317 points) had better beware of Team talkSPORT, whose squad looks the strongest on paper in the deciding fixture of Racing League, giving them a half a chance of bridging the 37-point gap to the top two.

Jack Mitchell rides all six of the Team talkSPORT runners at Newcastle, while league leaders Team ThoroughBid are splitting their six between Hayley Turner (four) and Sean Levey, and Goat Racing are relying on Laura Pearson to bring it home in the last, her only ride of the night, after Callum Shepherd plays the pivotal role in the orange in the first five events.

It’s a big ask for Team talkSPORT to outscore the table-toppers by an average of six points per race, as they will need to in order to claw them both back, but it’s certainly possible given some of the heavy-hitting horses they are unleashing on week six.

Winterwatch (ThoroughBid) has a positive profile as a three-year-old on a hat-trick and from a top yard. But, he has beaten a total of nine rivals – the best rated 75 – in winning a Catterick maiden and Lingfield handicap, also able to dictate latterly which he will not have the luxury of here with Vindolanda in competition. In short, this is a different – and more demanding – environment. Predicted points range: 8-12

Eastern Sheriff (Goat Racing) will be hoping Winterwatch helps to make it a true test, as Eastern Sheriff’s strength is his stamina – he’s a brother to St Leger winner Harbour Law. He’s been growing into the campaign, now just three races in, and the feeling is that he’s sitting on a peak performance here, if the race flow plays into his staying power. Predicted points range: 10-15

Second Slip (talkSPORT) is making his Racing League debut, with a sense that he has been kept for this meeting. His rating (90) means he has just one shot at a race in this band and has been saved for Newcastle, where he has shone on every visit (first, second and third from just three starts). That patience may well pay off as he’s improving all the time this year and could be a cut above this lot. Predicted points range: 15-25 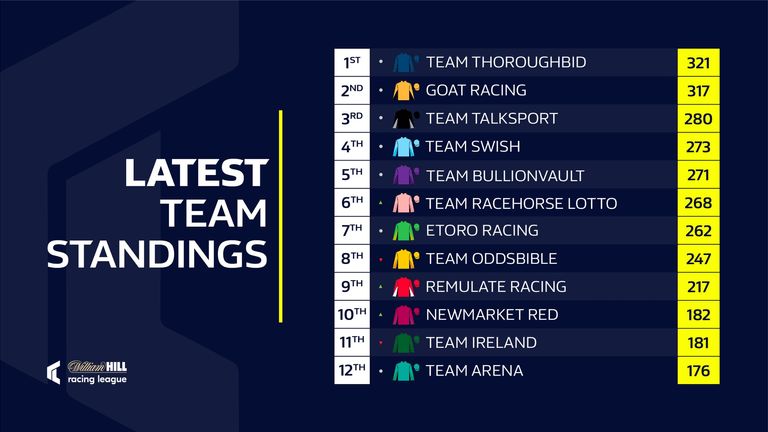 Scampi (ThoroughBid) is still seeking his first win (from eight attempts), but is usually thereabouts, including when third after some traffic trouble at Lingfield on week three. This will be his first experience at Newcastle, but it’s a track that rewards strong-travellers, and that’s a tool in his box. Predicted points range: 10-15

Red October (Goat Racing) has single-handedly accrued 19 per cent of Goat Racing’s points (61), via two seconds and a win, which is above and beyond the call of duty. Once more unto the breach, he’s up in weight and down in trip, at a course that’s less conducive to his prominent-and-press-up style than Lingfield or Windsor, so he will do well to score as highly here. Predicted points range: 8-12

Ace Rothstein (talkSPORT) ran riot in a Yarmouth handicap nine days ago, for which the handicapper has hiked him up 10lb, but the timeframe means he can run here under a penalty, making him 4lb well-in, on top of the fact he’s just getting going in life. The distance here is different, but he had the Yarmouth race won a long way out, and has experience of Newcastle from last year. Predicted points range: 15-25 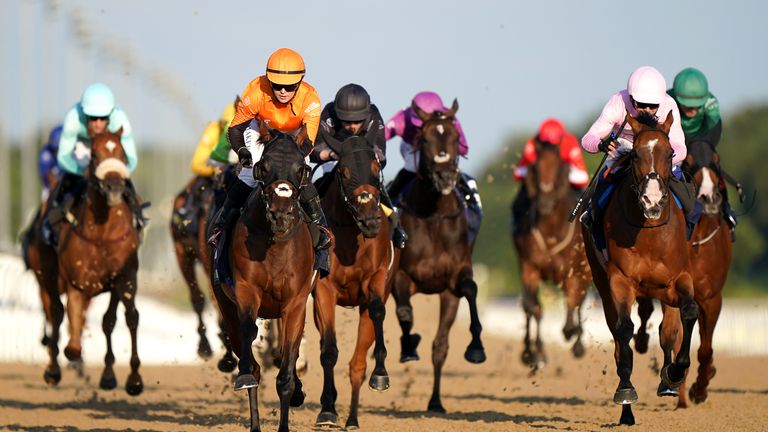 Fox Premier (ThoroughBid) seems fragile as is lightly-raced in recent years, but his latest return from an absence showed that he still has something to offer when a never-nearer fourth at Windsor in week four. He is well handicapped if he can revive some more, having dropped a further 2lb to 88 (was 97 at his peak), but it’s all a bit of a guessing game with him. Predicted points range: 6-10

Sugauli (Goat Racing) was beaten just a length into fifth at Doncaster in week two, despite not settling, which is his ongoing Achilles’ heel. Callum Shepherd is on board him for the first time, perhaps his most influential ride of the night, in the sense it’s the one he can most influence, as there’s more ability to be unlocked from Sugauli if he can find the key. Predicted points range: 10-15

Bonneval (talkSPORT) was the most impressive winner of week one of the Racing League, when the margin of victory did not tell the full story, given he came late and wide in a race in which that was very hard to do. A 4lb rise for that, therefore, sells him short. Bonneval went off at a price of 13/8 that day, forecasting the brewing storm, and it may be the same again here. Predicted points range: 15-25 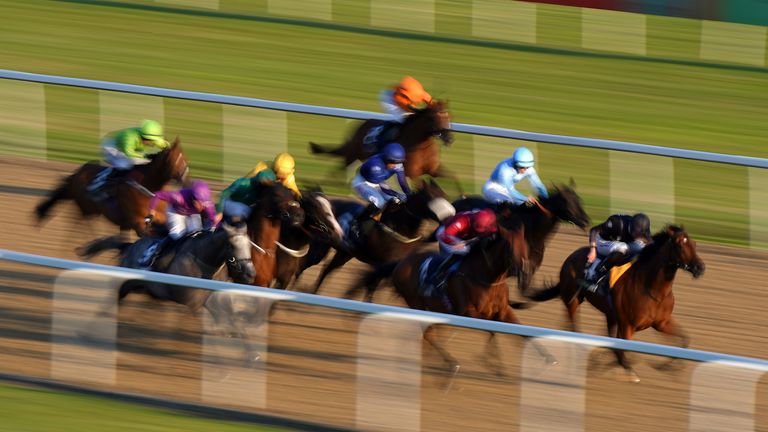 Theotherside (ThoroughBid) finished fifth then fourth in weeks two and five of the Racing League, and that was over her preferred trip of six furlongs. She has yet to finish closer than sixth in as many as six goes over this distance of seven furlongs. The strategy here may be to try and pick up any pieces – and any points she can – by saving up for a surge from the back after letting the others get on with it. Predicted points range: 3-8

Billhilly (Goat Racing) has had a brilliant season and a brilliant series, generating 50 points for the team by virtue of back-to-back wins at Lingfield. The race last week was supposed to be – by my reckoning – the highlight of the competition given the strength in depth involved, yet he took it apart, by four and three quarter lengths, and just a 5lb penalty means he’s officially 6lb well-in. It’s a quick turnaround, but he won last time like a fresh and flourishing horse, and another success by him here would go a long way to crowning Team Goat as the overall champions. Predicted points range: 15-25

Isola Rossa (talkSPORT) ran well for a close-up fourth over this course and distance in week one (2lb higher than now), and it’s easy to give her a pass for Lingfield next time when poorly drawn and positioned. She cannot match Billhilly on the weights and measures but has it in her to score significantly, especially if there’s a strong pace on, which seems likely considering Foxtrot Sizzler and Brains are in the line-up. Predicted points range: 10-15 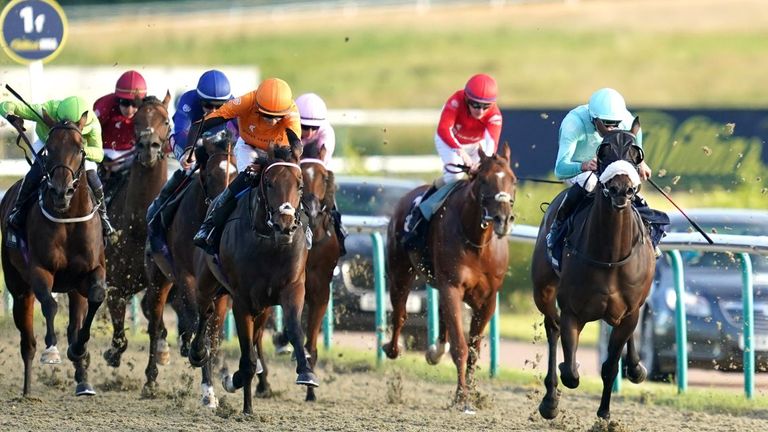 Typhoon Ten (ThoroughBid) has been the star of the show for Team ThoroughBid, with two wins at Lingfield, the first one a home fixture (six furlongs on the All-Weather) but last week’s was even more impressive in unfamiliar circumstances (seven furlongs on turf) and taking Sean Levey by surprise. He’s in the form of his life, but the feeling is he will be less compatible with this straight sprint at Newcastle. Predicted points range: 8-12

Cash Machine (Goat Racing) still has plenty of potential – only four races into his career – and finished with a full tank (in fourth) in week one, when squeezed and switched. There’s lots going for him, other than the draw as stall one puts him on the far flank, which is never ideal on the straight track at Newcastle. Predicted points range: 10-15

Musicality (talkSPORT) gets sterner headgear here – a visor instead of cheekpieces – and has the back-form to go close if the visor stimulates him, remembering he ended last year on a mark of 94 and has since slipped to 85. He finished one place ahead of Cash Machine in the six-furlong race in week one, but with a clearer passage. Predicted points range: 8-12 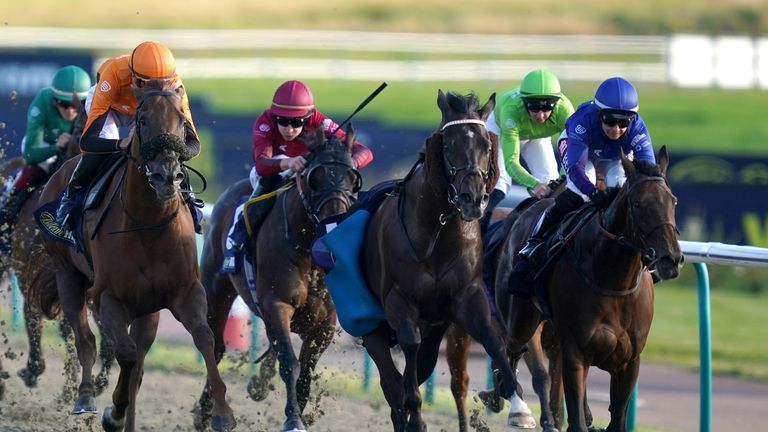 Kool Moe Dee (ThoroughBid) makes his fifth appearance in the Racing League, having accumulated 38 points so far, but the worst of his runs came here at Newcastle. There looks a likelihood that he will not be taken on for the lead, which increases his chances of scoring some points in what could be the deciding race. Predicted points range: 3-8

Electric Love (Goat Racing) did not get the rub of the green when beaten favourite at Lingfield last week, ending up widest, but she’s starting widest this time, from stall one, which puts the pressure on Laura Pearson to plot a profitable path from a difficult draw. We still have not seen the best of Electric Love, the lightest-raced runner in the line-up. Predicted points range: 10-15

Kingsholm (talkSPORT) finished only sixth in week one, but ran the fastest of any horse in that race between three furlongs out and one furlong out, a fast-forward move that caught up with him in the finish. Generously dropped 2lb since, taking him back down to his last winning mark and, in headgear for the first time, he’s a very interesting final swing of the bat for Team talkSPORT. Predicted points range: 8-12

Taking the median of my horrifically unscientific predicted points range for each horse in the three table-topping teams has ThoroughBid collecting 52 points, Goat Racing generating 80 points and talkSPORT the highest with 92 points, which would crown Goat Racing as the team winners.

If ThoroughBid are to maintain top spot, you get the feeling it’s a game of cumulative gains, of steady rather than spectacular scoring, though Goat Racing could blow them and the rest out of the water if one or both of their heavy-hitters – Red October and Billhilly – strut their stuff again.

But, talkSPORT may at least make it a three-way battle for a while if their mainline missiles of Ace Rothstein and Bonneval hit the target by halfway. It could be quite the climax. 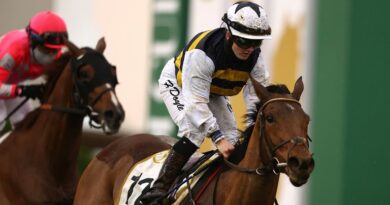 Willie Mullins to send True Self on travels again