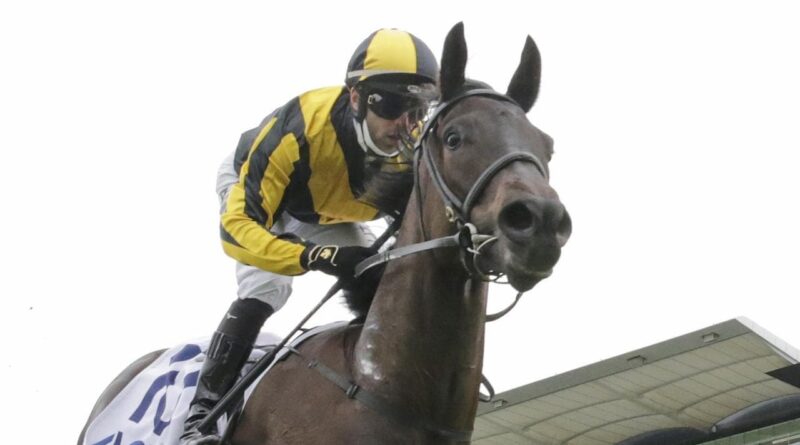 Sky Command is giving trainer Gary Portelli a similar vibe to his former outstanding filly She Will Reign after another brilliant win at Royal Randwick on Saturday.

“I haven’t had a horse that can run the times on the track that Sky Command can since She Will Reign,’’ Portelli said.

“But they can do things at trackwork that gets you excited but then they don’t have that finish on raceday.

“Today proved to us we have a serious contender. She strong through the line and I’m starting to get that feeling we have a very nice horse on our hands.

“She is the first horse I have had since She Will Reign to give me that feeling.’’

She Will Reign won six of her 12 starts including Group 1 wins in the 2017 Golden Slipper and Moir Stakes.

Sky Command takes out the first for @GaryPortelli 🙌@brentonavdulla took the filly to the front and didn't look back 👌 pic.twitter.com/7KyrviAKPa

She has since been sold as a broodmare to Japanese interests.

Whether talented two-year-old Sky Command can reach the lofty heights of her former stablemate remains to be seen but she has got her race career off to the perfect start, scoring her second win from as many attempts in the ACY Securities Handicap (1100m).

Favourite Sir Crackle ($3.90) showed speed early but was under pressure to stay in touch with Sky Command around the bend and dropped out to finish a well beaten seventh.

Avdulla has ridden Sky Command in both her wins and told Portelli the filly has made considerable improvement since her debut Warwick Farm success.

“Sky Command took care of the gate (barrier nine) herself then came back to me better today than at Warwick Farm,’’ Avdulla said.

“She wasn’t running through the bridle like she was the other day and once I balanced her up over the rise she dashed away.’’

Avdulla predicted Sky Command, who is owned by Bert Vieira of Trapeze Artist fame, has a very promising future.

“Usually when they can win on debut you like to see them go out and do it again because if they can, it’s usually the sign of a good filly,” Avdulla said.

“Like any athlete, the ones who have got good speed, in anything they do they help themselves. She’s got great gate speed and I was able to control (the tempo), she skipped through the ground well and won with a bit in hand, too.

“She’s raised the bar again today, I thought. Mark’s horse (Newnham, trainer of Dragonstone) ran quicker time than her the other day but she just had the benefit of one run and he’d had a couple, so she has taken that natural improvement.

“If she keeps progressing, there’s no reason she can’t develop into a nice little stakes three-year-old. Gary’s got her firing and I’m sure next time in she will be even better.“

Sky Command’s two wins have been on heavy tracks but Avdulla said there was nothing to suggest Sky Command would not be as effective on top of the ground.

Portelli is also adamant Sky Command is not just a “wet-tracker”.

“This filly can run anytime on the track, wet or dry,’’ the trainer said.

“She was out there galloping by herself today. She didn’t know there was any other horse in the race except at the start.

“It is going to be interesting to see what happens when one does come at her.’’

Portelli, who has also produced emerging youngster Royalzel to win three races this winter, said he will give Sky Command a short let-up then consider a spring campaign for the rising three-year-old filly.

“She won’t have much time out, spring will be here soon enough,’’ the trainer said.

“She can be a bit of a ‘hot’ horse at home and I was worried early on that she was going to be a problem on raceday,’’ he said.

“But she has come a long way and our staff have done a great job with her, particularly Lenny. Unfortunately, he got kicked at trackwork (Friday) and broke his elbow so hopefully he’s feeling a bit better watching Sky Command win again.’’

Baker’s stayer on the up

In gloomy, wintry conditions, Harpo Marx stood out like a shining light with an impressive staying effort at Royal Randwick.

The heavy rain which fell during the race could not dampen trainer Bjorn Baker’s enthusiasm for Harpo Marx as he zoomed from last to first in the Schweppes Handicap (2000m).

Rachel King’s patient, confident ride had Baker feeling a little nervous mid-race but the trainer had no reason to worry as Harpo Marx swept past his rivals to win easing down by a widening margin.

“They haven’t been making up a lot of ground from the back today and when he was still a clear last for most of the race, I was getting a little anxious.

“But Rachel rode her beautifully, she knew what she was doing and what she had underneath her.’’

Harpo Marx ($2.35 favourite) reeled in his rivals so effortlessly in the straight there was a touch of arrogance about his 1¾-length win over Savvy Legend ($9.50) with former French stayer Montabot ($31) finishing on well for a good third, a half-length away.

King said she felt confident a long way out as Harpo Marx was travelling comfortably through the deteriorating track conditions.

“I was aware he was on the seven-day back-up, especially when this rain suddenly came, it was going to be even more testing for him and with a big weight on his back,” King said.

“But I’d said to Bjorn after his first-up run, he’s gone to a whole new level this preparation and he’s definitely proving that now. He’s in flying form.”

Baker said Harpo Marx’s emerging staying ability is reminiscent of stablemate She’s Ideel, the tough mare who has developed into a genuine Group 1 stayer with her second to Sir Dragonet in the Tancred Stakes and fourth behind Selino in the Sydney Cup to end her autumn campaign.

“Harpo Marx is lightly-raced, he’s by Galileo and is only going to continue to improve,’’ Baker said.

“I’m not sure what we will do with him because he handles these wet tracks so well but I think we might look to give him a break soon and get ready for the spring.

“I can see Harpo Marx joining She’s Ideel on a path towards The Metropolitan.’’

Harpo Marx gave the Baker stable a brace in successive races after the trainer led in Van Griz in the previous race.

Baker’s double moves him to 52 city wins for the season and he trails only Chris Waller (154 wins) and James Cummings (53 wins) in the Sydney trainers premiership. 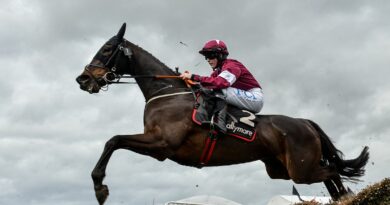 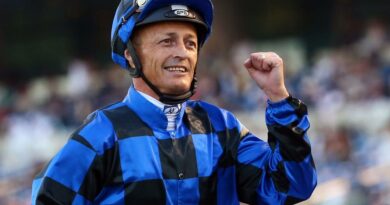