Omen punters might have found Rocket Tiger who maintained his unbeaten record in the Boxing Day Plate (1100m). The two-year-old is by Cluster, sadly one of the buzz words for this pandemic year.

Spackman, who has eight in work at his Wagga Wagga stables, was understandably emotional after training his first metropolitan winner.

“We are so proud of this little horse,’’ Spackman said.

“I told Kathy (O’Hara) before the race he is the type of horse if he gets his head in front he doesn’t like anything go past it.

“He’s a home-bred and a half-brother to Takookacod (a winner of five races) but I think this little horse is the best I’ve had.’’

Rocket Tiger ($26) settled outside leader and hot favourite Vandoula Lass ($2.70) before finishing too strongly for that filly to beat her by a long head with Vianello ($4.20) a short neck away third.

Berry looked to have a lapful of horse at the 300m but a persistent Rocket Tiger would not go away.

Rocket Tiger, ridden by the in-form Kathy O’Hara, edged in front halfway down the straight and warded off Vandoula Lass in the drive to the line.

“I wanted to keep the favourite honest,’’ O’Hara explained. “I didn’t serve it up to him but I didn’t want to let that horse get away from me.

“I just kept him up to the gallop and made sure he was close to the leader. He was really good late.

“He was super tough and he put his head down when it counted, he wanted to win.’’

O’Hara has finished 2020 with a bang. She also won on Bowery Breeze in the Schweppes Handicap to complete her second successive city double in as many meetings after riding a brace at Warwick Farm last Wednesday.

Rocket Tiger, who has the distinctive “fish” image branding of owner-breeder and Murray cod farmer Noel Penfold, won on protest at his Canberra debut earlier this month.

Spackman said Rocket Tiger’s determination under duress at Canberra gave him the encouragement to set the gelding for the Randwick race.

“I identified this horse early and I didn’t tell Noel Penfold too much about the horse as I was a bit worried he might end up with a city trainer,’’ Spackman revealed.

“I was shocked at the time he ran in Canberra (breaking 33s for the final 600m) so we came here with some confidence. He is as tough as nails and just keeps improving and improving.

“He will go for a quick little break now and I’ll speak to the owner but we’ve probably got to think about a Black Opal or a Wellington Boot.

“But they’re talking a (Golden) Slipper chance here, too, and we’ve knocked them off so I don’t know — the world is his oyster.”

English jockey Leonna Mayor is on fire after making the switch from the saddle to a television studio in a boom time for women in racing….

English jockey Leonna Mayor is on fire after making the switch from the saddle to a television studio in a boom time for women in racing.

Vandoula Lass and Vianello had their chances to win but found Rocket Tiger simply too tough under pressure.

The start of the race was delayed for a few minutes when Silver Thorn became cast in the barriers and was subsequently scratched.

Jockey James McDonald was noticeably limping as he walked back after the race but was subsequently passed fit by doctors to continue riding and duly won the next race on boom bush sprinter Pinnacle Prince. 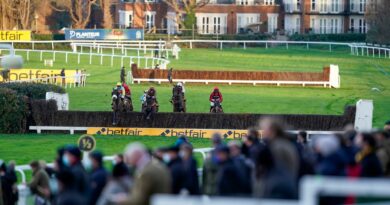 Race-by-race preview and tips for Gosford races on Tuesday

Could Aaron Rodgers have run in for game-changing TD? Viewers debate Packer QB’s decision
We and our partners use cookies on this site to improve our service, perform analytics, personalize advertising, measure advertising performance, and remember website preferences.Ok