A three-horse war looms for some promising sprinters in one of today’s standout races at Scone, and it may just be a real pointer to the future.

The flying three-year-old Zoustar filly Zaniah is the one to beat in a class 1 handicap (Race 5) over 900m after giving nothing else a chance from the front resuming at Taree. That win just over a fortnight ago as a heavily-backed favourite was her first run in eight months, and signalled to leading trainer Kris Lees he made the right call in luring the former NZ-based sprinter across the Tasman. 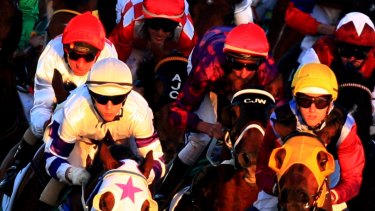 Capital affair: there will be plenty of interest in the fifth at Scone on Monday.Credit:Jenny Evans

Yet although she’ll be fairly cramped in the market, two rivals are there to spoil the party. The big danger is two-year-old colt North from the Snowden stable, which is coming back from a tough run in heavy ground against stronger opposition at Randwick, but prior to that beat a good maiden field on debut at Wyong.

The other big hope is the more experienced Warwick Farm-trained three-year-old filly Dizzy Miss Lizzy who will naturally drift back from a wide draw and try to run the two big guns down. Dizzy Miss Lizzy has had four runs back in her second preparation, the latest the most impressive when she got home hard behind smart galloper Mr Wong in a good quality class 1 at Muswellbrook.

Earlier, in a Maiden Plate over 1100m to open the meeting, the Snowden camp will be banking on a change of attitude for Vici who returns as gelding, and already the signs are good after he cruised through the line in a recent trial at Rosehill with plenty left in the tank. This race also looms as a real three-pronged two-year-old showdown, with smart Warwick Farm filly Just Jessie also resuming off a dominant trial win and the Kris Lees stable at Newcastle sending out their well-rated colt Giordano for the first time.

Nube Negra too quick for Altior at Kempton