Kevin Harvick is no longer locked into a NASCAR Cup Series playoff spot, as his race-winning car from Sunday at Texas Motor Speedway was found to have illegal alterations to the rear spoiler.

NASCAR slammed the Stewart-Haas Racing team with penalties, including not allowing Harvick to use the win for the automatic berth to be among the four drivers who will vie for the championship Nov. 18 at Homestead-Miami Speedway.

Harvick was docked 40 points, crew chief Rodney Childers and car chief Robert Smith were each suspended for the last two races of the season, and Childers was fined $75,000.

“It is not our desire to issue any penalties but will do so when necessary to ensure each race and championship is contested on a level playing field,” NASCAR senior vice president of competition Scott Miller said.

The penalty leaves Harvick clinging to the final playoff spot available on points, as he sits three points ahead of Kurt Busch and 17 ahead of Chase Elliott going into the elimination race Sunday at ISM Raceway in Phoenix.

“We work tirelessly across every inch of our racecars to create speed and, unfortunately, NASCAR determined we ventured into an area not accommodated by its rule book,” SHR vice president of competition Greg Zipadelli said Wednesday in a statement. “We will not appeal the penalty. Instead, we will direct our immediate focus to this weekend’s event in Phoenix and control our destiny on the race track.”

Joey Logano is the only driver locked into the final four. Kyle Busch (28 points ahead of his brother, Kurt) and Martin Truex Jr. (25 points ahead) have cushions that should allow them to advance if they run reasonably well at Phoenix.

Phoenix is one of Harvick’s best tracks. He has nine Cup wins there, including the most recent race in March. He has won seven times in his past 12 starts — and finished outside the top 5 only twice in those starts — at the 1-mile flat track.

While the track has remained the same, the race Sunday will be the first with a relocated start-finish line, now positioned in the dogleg portion of the former Turn 2.

NASCAR on Wednesday also penalized Ryan Blaney, who finished second at Texas, and Erik Jones, who finished fourth. They were docked 20 points as well as having their car chiefs suspended for two races and their crew chiefs fined $50,000.

Blaney had a door front crush panel violation as the filler panels didn’t remain permanently attached, and Jones had a package tray violation. Both drivers were eliminated in earlier rounds of the playoffs.

Siskin and Monarch Of Egypt to clash in Railway 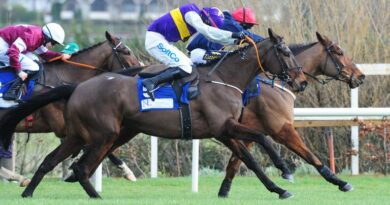