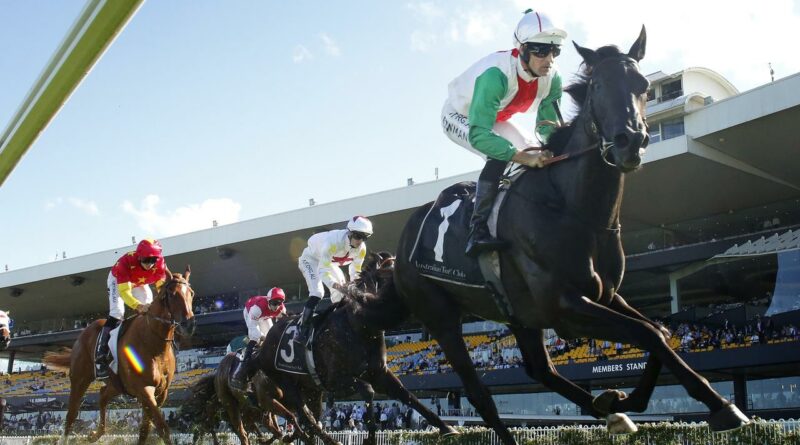 The maestro Murray Baker was moved to compare his latest three-year-old prodigy Aegon with former champion Dundeel after a dominant win at Rosehill Gardens.

Baker, the Kiwi training genius, had to watch the race from his home in Cambridge as he was unable to cross the Tasman due to COVID-19 restrictions but said Aegon’s powerful finishing sprint reminded him of Dundeel.

“Aegon is a different type to Dundeel and those other Derby winners we’ve had,’’ Baker said. “But Dundeel had a great sprint on him and Aegon is the same.

The New Zealander is unbeaten! Aegon and @HugeBowman land the Hobartville Stakes in a pearler of a ride! pic.twitter.com/lx5DsBjJHi

“It’s just that Aegon has been stuck for room at his last couple of runs back home and he hasn’t really had a chance to show what he can do. But to win the Hobartville is pleasing because he showed he can match it with the good Aussie three-year-olds.’’

Dundeel, who raced in Australia as It’s A Dundeel, won the Sydney three-year-old triple crown in 2013 when he swept the Randwick Guineas-Rosehill Guineas-ATC Australian Derby treble.

Baker confirmed the Group 1 $1 million Randwick Guineas (1600m) at Royal Randwick on March 6 would be Aegon’s next start.

“We will have a think about it but we are no closer to knowing if Aegon will stay,’’ Baker said. “Obviously the Randwick Guineas is his next race and then he will probably go to the Rosehill Guineas

“I guess we will know then if he is a Derby horse or if we come back to the mile for a race like the Doncaster. It would be nice to win another Derby but I don’t know if he will run 2400m yet.’’

Aegon ($4.80) scored his fifth win from as many starts when he burst between runners in the straight to win by nearly two lengths from North Pacific ($3.40) with Prime Star ($17) a half neck away third. Peltzer ($2.80 favourite) led for home but faded from the 200m and finished fourth, beaten nearly three lengths.

Hall of Fame jockey Hugh Bowman said Aegon “has the world at his feet” after his brilliant Hobartville win.

“Aegon’s got an excellent record and I was ultra-impressed with him,’’ Bowman said. “He didn’t jump particularly well, he just missed it slightly but it didn’t affect my position from a good draw.

“Mid-race he was just in such a good rhythm, it was the sort of rhythm you can see him stepping up to a higher class and it’s why he has the record he has. He doesn’t spend any energy mid-race.’’

Bowman admitted he didn’t have a lot of room to drive Aegon between runners in the straight.

“I could just tell when he went through the gap he was going to produce, he just loved the competition. I think he won with a bit in hand to be honest,’’ Bowman said.

Murray Baker is still unsure if Aegon will target the ATC Australian Derby or the Doncaster Mile. Picture: AAPSource:AAP

“The Randwick Guineas is the obvious next race. He won’t have any issue with that and there is no need to decide at this point (Derby or Doncaster). I think we just enjoy the win and see how he pulls up.’’

Baker explained that Aegon was too immature to race as a two-year-old, with the gelding’s race debut delayed until last September.

“We have never had any trouble with him but he just needed time as a young horse,’’ Baker said. “We only gave him a trial as a two-year-old but we decided not to race him until his three-year-old season.

“I think being patient has been the makings of this horse. He’s strengthening and improving with racing. We can look forward to the Randwick Guineas, he will be better at the mile.’’

James McDonald, rider of North Pacific, is keen for the return clash with Aegon at Randwick.

Prime Star was as genuine as always, showing determination to get up for third. “He’s a model of consistency and will only keep improving,’’ jockey Jean Van Overmeire said.

ANOTHER ONE SECURES SPOT IN FINAL

The Gary Colvin-trained Another One stormed home to win Wagga’s Country Championships Qualifier to secure a place in the final at Royal Randwick.

The three-year-old, by Super One, defied a betting drift and gave the frontrunners a big head start at the 350m before mowing them down in the last stride to win in a photo.

Despite having to make up many lengths in the straight, the chestnut looked good as he let down under jockey Nick Heywood, who had to ride him conservative from a wide draw.

Wow! What a finish! Another One comes from the clouds to take out the @NewhavenPark Country @ChampionshipsRR Qualifier at @mtcwagga!

He and Bautista book their place in the final at @RoyalRandwick on April 3. pic.twitter.com/lAoLoVTjYv

Bautista, trained by Donna Scott, snuck home for second late after $81 chance Takissacod was looking more and more like causing a huge upset after leading for much of the final 50m.

Had Bautista won it also would’ve been a big upset as he started as a $61 chance behind his more fancied stablemates Halo Warrior (sixth) and Oamanikka (seventh).

Scott said her four-year-old will need conditions to suit in the $500,000 final in April on day one of The Championships at Randwick.

“It was a great run,” Scott said. “We had four runners so I just wanted to get one into the final. I’ll be praying for some rain and he’s a tough horse.”

Originally published asBowman: Unbeaten Kiwi has world at his feet