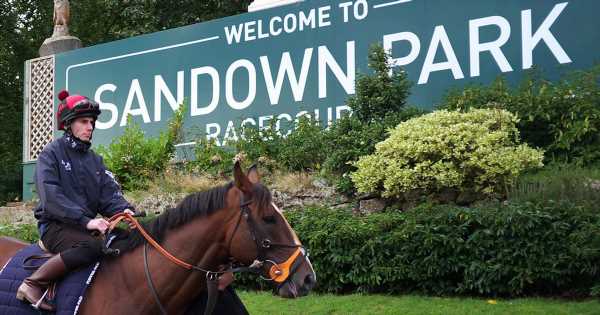 THE Jockey Club warned racing fans to stay away from race meetings after a member of the public breached COVID-19 security measures at Sandown Park on Saturday.

The man, believed to be in his early 60s, entered the Esher track by the racecourse stables at the start of the meeting.

But he was quickly shown the door after failing to produce the required accreditation when challenged by Sandown staff.

The British Horseracing Authority, whose protocols to combat the spread of coronavirus have been in operation since the sport resumed from a 74-day blackout on June 1, declined to comment on the incident.

But a spokesperson for Sandown’s owners, Jockey Club Racecourses, said last night: “A member of the public entered the site through a side entrance.

“They were immediately spotted and escorted to the nearest exit, spending no more than two minutes inside Sandown Park.”

Since racing’s comeback last summer, all attendees have been subject to identity and temperature checks before gaining admission to the racecourse.

Although the general public returned to the grandstands on December 1, Downing Street’s latest revision of the COVID-19 ‘tier’ system took the action back behind closed doors on Thursday.

“While this is an isolated incident in more than seven months of racing predominantly behind closed doors, we would remind everyone that due to Government guidelines no members of the public are permitted to attend racedays until further notice,” added the Jockey Club spokesman.

Metier earned a quote of 7-1 for the Supreme Novices’ Hurdle with a 12-length supremacy the fixture’s feature race, the Grade 1 Unibet Tolworth Novices’ Hurdle.

The 7-4 favourite’s success was also Fry’s first at the highest level since moving stables to Corscombe in Dorset last June.

“I’m absolutely delighted to get a first Grade 1 winner from the new yard,” said Fry, who sent tthe likes of Unowhatimeanharry, If The Cap Fits and Bitofapuzzle to capture top-tier prizes from his old base half a dozen miles down the road at Seaborough.

“To get the new yard up and running, moved in and set up, is a lot of hard work from the team – not least for my wife Ciara, who not only is assistant trainer but is married to me!”

Seeyouatmidnight, the horse bought for a six-figure sum by Cheveley Park Stud owners David and Patricia Thompson to contest the 2018 Grand National, hung tough for victory in the Unibet Veterans’ Handicap Chase.

The Thompsons gifted the 13-year-old back to Scottish Borders trainer Sandy Thomson after Seeyouatmidnight sustained an injury in returning 11th behind Tiger Roll at Aintree.

And after watching his stable favourite land the £43,330 pot under Ryan Mania, who rode 66-1 outsider Auroras Encore to National glory in 2013, Thomson said: “It's such a shame that he hasn't been a sounder horse, but he's given us so many great days.

“You just have to enjoy the good ones.”

+ JAMIE MOORE rode the 800th winner of his career as Hudson De Grugy, trained by the jockey’s father Gary, justified odds of 4-7 in the Unibet Extra Place Races Every Day Juvenile Hurdle at Sandown Park.

As Winx bows out on a memorable day, there’s a hint of future glories

Polydream downed on return at Saint-Cloud