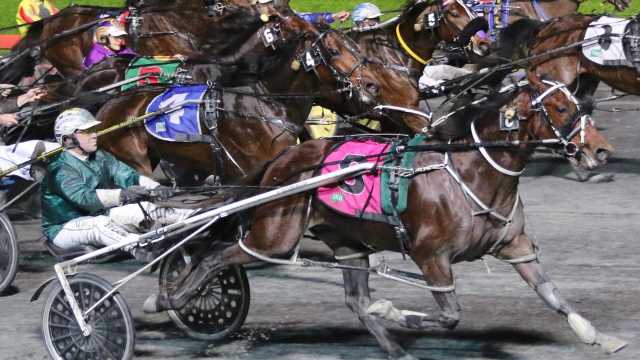 Australasia’s greatest big-race driver Anthony Butt is planning to dethrone the best pacer in the land when he partners boom Kiwi Copy That in Saturday night’s Group 1 Sunshine Sprint at Albion Park.

Butt is under no illusions as to the challenge that awaits his charge when he takes on the all conquering King Of Swing but is bullish about his chances coming off the quick back-up from his close second in last week’s Group 1 The Rising Sun.

“The draws have fallen in our favour. Copy That’s draw (gate five) is just OK, but it’s a lot better than King Swing’s (11),” Butt said.

“I’ll be making full use of the better draw, I have to. King Of Swing’s a great horse, but he’s been able to find the lead in so many of his races. It’s a different test for him this time.

“There’s some quick beginners inside me and Turn It Up (gate seven) might even cross us all at the start he’s so quick out, but I can’t go back. I have to keep as much space between my guy and King Of Swing when we settle down.

“It’s such a short race, you know Luke (McCarthy, driver) will be making his run early on King Of Swing to get him into the action as well.”

Copy That holds a slight edge in betting over King Of Swing for the Sunshine Sprint. Picture: Dan CostelloSource:The Courier-Mail

The Victorian-based Butt made the trip up to Queensland earlier in the week, avoiding any potential border closures or quarantine periods to make himself available for the Group 1 feature on Saturday night.

King Of Swing may have two Miracle Miles and an unbeaten streak of nine wins in sprint races over the past 18 months but he hasn’t had to overcome a back-row draw in any of those.

The clash with Copy That makes for fascinating viewing and betting, with the Kiwi a sprinting specialist – boasting five wins and two seconds from his eight starts over trips less than 2000m.

Bookmakers have struggled to split the two with TAB giving Copy That a slight edge ($2.15) over King Of Swing ($2.20).

The next closest in the market is Bright Energy ($11).

“He’s (Copy That) versatile, but he’s such a high-speed horse he’s probably at his very best in shorter races,” Butt said.

“He did everything except win last week. He had those around home covered on the (home) bend, but I saw Amazing Dream waiting for the run and when it came she was just a bit too good for us after having an easier run.

Tips and race-by-race preview for Gunnedah on Monday

Rce-by-race preview and tips for Gosford on Thursday