Home » Horse Racing » The Phoenix: Gai Waterhouse and Adrian Bott finally on the board in the winter carnival as Volcanic Rock emerges as a JJ contender 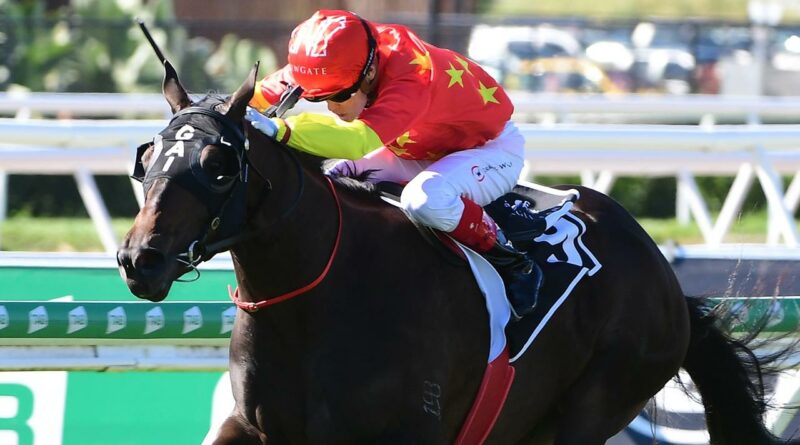 Gai Waterhouse and Adrian Bott already boast the favourite for the Group 1 JJ Atkins next week and they could have another surprise contender after Volcanic Rock broke through to land their first winner of the winter carnival.

The duo have been a mainstay in Queensland but had struggled to land a blow prior to Saturday’s The Phoenix (1500m) where the difficult two-year-old made jockey Craig Williams work overtime.

Holding a nomination into next week’s JJ Atkins (1600m), Bott said they would now consider a short back-up where stablemate Converge sits atop betting as a $3.50 favourite.

“He holds an entry into the JJ so it is something I will discuss with Henry Field (from Newgate Farm) and the connections,” he said.

Cracking win for @GaiWaterhouse1 with Volcanic Rock in the second at Eagle Farm @BrisRacingClubpic.twitter.com/kodVf1BoDz

The son of Hinchinbrook defied a massive betting drift, blowing from an odds-on quote to $3 at the jump.

Stalking the leader, the drift looked justified on the turn when Williams was forced to get to work early, but it paid dividends.

“He is a lovely horse but you have to be very forceful,” Williams said.

“I have four children at home, he is like one of them without naming names.

“Gai and Adrian have done a really good job, obviously he is now a gelding and he’s owned by the breeders who would like to keep him a colt.

“Most importantly, he was really genuine late and while he took a bit more work, he is an out and out trier.

“He raced on the bridle until he got a bit of pressure. I didn’t want him to get disappointed while he was going well because it took a lot to get him motivated in the first place.”

Craig Williams thinks Volcanic Rock will give a good account of himself in the JJ Atkins. Picture: Trackside PhotographySource:Supplied

With Bott spending a significant amount of time in Queensland over the past month, he said it was good to finally break through on Saturday.

“We haven’t had too many to fly with so far but it is good to get one on the board here,” he said.

“I love coming up here, we will see what we do with him next week now.

“He has always been a very handy two-year-old for us, he won early on for us.

“He always just needs that encouragement but when he puts it all together he can be a top-class horse going forward.”

Williams said Volcanic Rock would make his presence felt if he was to step up to the mile next week in the JJ Atkins.

“He is very genuine when he knows there is competition,” he said.

“I think he will be better for today, he will get some confidence so I think he would go very, very well in a JJ Atkins.”

Avilius serves up class on a Plate