Victorian Treasurer Tim Pallas, in last month’s state budget, introduced a new 50 per cent tax on organisations that make big profits in quick time, which will come into effect on July 1 next year.

The new hit would include sales of large land parcels.

The Melbourne Racing Club would be liable for up to $200m in tax if it sold Sandown Racecourse for residential development.

The MRC’s only hope of avoiding such a slug would be to convince the state government it was a not-for-profit organisation or a sporting club.

Failing to convince the government the MRC should not have to pay the hefty tax could threaten the viability of any move to sell Sandown, which would potentially be used to fund the planned Caulfield Racecourse redevelopment.

But Little, who runs the Save Our Sandown group, which is opposed to the sale of the course, welcomed anything that could scupper any proposed deal.

“We just hope it doesn’t happen and we’ll clutch at any straws to keep it,” Little said.

“We just don’t think Sandown should be removed.”

Trainer Colin Little is opposed any sale of the Sandown Racecourse. Picture: AAPSource:AAP

Little said the Sandown surface was perfect for horses and could not be reproduced anywhere in Melbourne, echoing Cranbourne trainer Mick Kent’s comments about the track on Saturday.

“We just think it would be a tragedy to lose Sandown,” Little said.

“It’s two racecourses and there’s nothing similar to it. Nothing will ever come up to that standard.

“It’s great on horses with the beautiful long straights and not many horses go wrong there.

“They want to replace it with a dog track at Caulfield with continuous circles, which would produce more breakdowns.”

The Cox Plate-winning trainer said the MRC should invest in maintaining the off-track facilities at Sandown while deciding their next move with the venue.

“They keep saying they lose $5m a year on it but I don’t know if that that’s right,” Little said.

“Sandown itself is a bit of an eyesore. The track itself is magnificent but the rest of it looks like it hasn’t had a coat of paint on it in 20 years.

“It just looks like they’re trying to degrade it as far as we’re concerned.”

Champ lives up to billing with Challow Hurdle victory 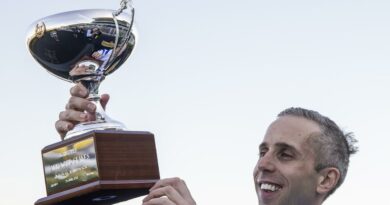