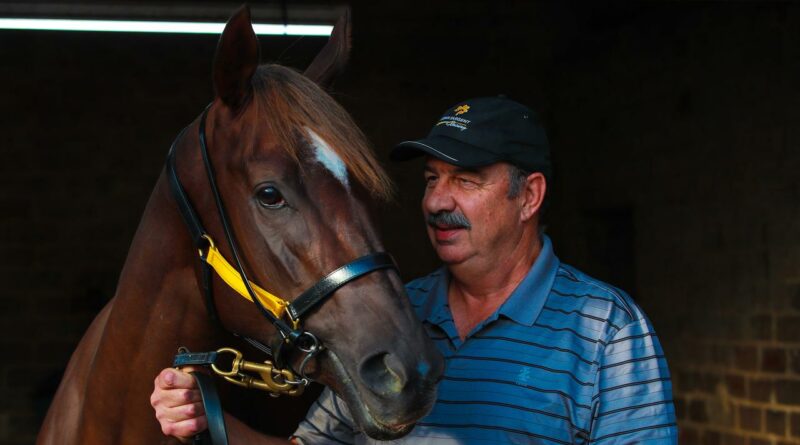 This time in under a week, John Sargent could be a member of an exclusive club of trainers to have won an ATC Derby and ATC Oaks with Favreau timed to peak in Saturday’s Blue Riband.

Sargent’s Tavistock three-year-old spent Easter Sunday morning wading through the salt water at Brighton-Le-Sands, the day after his brave fourth in the Tulloch Stakes at Rosehill Gardens.

‘’He went to the beach and had an easy day,’’ Sargent said. “He can have an easy week because all the work has been done now for Saturday.’’

Sargent, the last trainer to beat Winx thanks to Gust of Winds’ 2015 ATC Oaks triumph, will have plenty of empty boxes at his High Street headquarters come Saturday afternoon with several of his autumn arsenal in action.

“Four Moves Ahead is in the Sires, I’ll have Easy Campese in the Carbine and Land Ahoy in the Adrian Knox and then into the Oaks,’’ the trainer said.

Sargent can begin Derby week on the right note with two red-hot chances headed to Hawkesbury on Monday, namely Toostar and the exciting debutant Auzstar.

Auzstar, who lines-up in the Thank You All Emergency Services Maiden Plate (1100m), looked the part in both of his trials at Randwick last month, finishing a close runner-up in the first before winning the most recent by a comfortable margin.

‘’It looks quite a good maiden field actually but he is ready to go and there are no reasons not to run him,’’ Sargent said. ‘’He is very promising.

‘’He is learning all the time and this should be a nice race for him. He has drawn barrier two so he should run up on the speed somewhere.

‘’I think he is a very nice horse and we will find out (today) because there are a couple of good trial horses there in the race too.’’

Auzstar is a son of Zoustar out of Darci Brahma mare Lucky Country who finished second in three Group 3 fillies races in New Zealand.

‘’This is the first Zoustar I’ve had,’’ Sargent said. “I wouldn’t mind some more.

‘’He is not an overly big horse, he is medium-sized, but he has got a very big stride on him for a little horse.’’

All things being equal, Auzstar is a chance of heading to Brisbane towards the end of the season and could have company on the float from Toostar whose Hawkesbury mission today is the Thank You NSW SES Maiden Handicap over 1400m.

Originally pegged as yet another one of Sargent’s seemingly inexhaustible assembly-line of classic fillies, the daughter of All Too Hard might be more miler than stayer based on her shock first-up third at $81 on a 1300m maiden on the Kensington track.

‘’I tried to see if she was an Oaks filly (last campaign) but she was probably too weak,’’ Sargent said.

“She went very well first-up and she seems to have improved with it. I think it is a nice race on Monday. She will get a suck run from (barrier one) and be a couple of pairs back the fence.’’

Canberra trainer Gratz Vella has plenty of options with his rising filly Crucial Witness but will stay at the shorter trip for another run at Wagga Wagga on Monday.

The Star Witness filly comes off an impressive two-length win at her home track over 1000m last start and lines up in a Class 2 Handicap (1000m).

It looks like a competitive race so she’ll have to go to another level again to win.

“It was a very good win last time because she did it the hard way. Everything else was more or less stalking her and she kicked away and won well,” Vella said.

“She’s done very well since that run which is why I’ve given her three weeks off to go to 1000m again.”

Regular rider Kayla Nisbet stays on but she’ll have to find a good spot in the run from barrier 10 which is the only knock against her mount on paper.

Vella just wants her to ride the race on instinct but she’ll no doubt be on the speed after leading all the way to win last time.

“I don’t like the gate but she’s going very well and the track plays pretty good there at Wagga and she’ll get a chance if she gets a nice sit behind them,” Vella said.

“I’ll leave it up to Kayla but the horse has got the talent to jump and be there. She’s third-up and peaking.”

Vella said she’ll get over more ground soon which will open up various options for her.

“I’d like to get her ready for the Wagga Guineas or the Queen of the Turf,” he said.

“I’ll know more about that after this race. A Highway race is another option.

“Looking at the way she works, I think 1400m and 1600m will eventually be her ideal distance.”

Casino Time is Vella’s other possible runner on the day, in race six, but he’ll need a scratching to get a run as he’s currently first emergency.

“He’ll go around if he gets a run. He’s on the quick back up because I need to get him up to 2000m. That’s where he races best,” Vella said.

Horse racing tips today: Horses you must back at Warwick, Hexham, Chepstow, Kempton