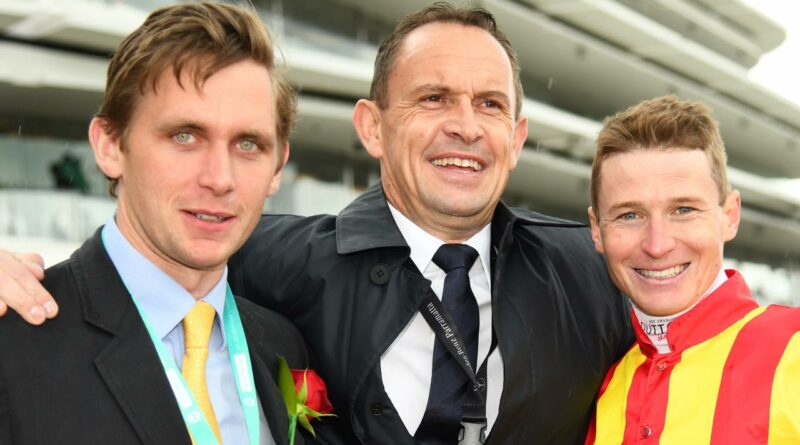 When you do an in-depth interview with Chris Waller’s right-hand man Charlie Duckworth, there’s one question you can’t avoid asking.

When are you going to become a trainer in your own right?

And the answer given was a complete surprise — but also explains why Waller puts his full trust in the Englishman.

Duckworth grew up in the tiny village of Lambourn, a little more than 100km from London and with a population of around 5000.

But it’s a racing population.

“Newmarket is the more famous of the two training centres, while there’s a lot more jumps at Lambourn,” Duckworth said.

“You wouldn’t live there if you didn’t have an interest in racing.

“My mum was the racing secretary to Ian Balding, Andrew Balding’s father, and I only learnt that when I came down here.

“When Malcolm Johnston did his stint in the UK, he was with Ian Balding and had no driving ­licence, so my mum had to drive him to the track.”

Duckworth’s father was in the army for a time and rode as an amateur over the jumps.

He didn’t know straight away that he would be involved in the sport but started riding trackwork when he was 14 and was thrown into riding by senior peers.

“They were moving my back and legs around to whatever the position they were meant to be in and basically rode my horse for me,” he said.

“I thought it was the best time of my life so I rode whenever I could and I wanted to be a jockey.

“I rode a few races over the jumps and the flats as an amateur in England and Ireland. It sounds weird but if you start riding at 18 and not 16 you’re behind the eight-ball.

“I’m not saying that’s the reason why I’m not James McDonald but I was seen as one of the older ones and weight got away from me on the flat.”

Duckworth wanted to be a jumps jockey but rides weren’t coming that easily and he was ­offered an assistant trainer’s role.

Duckworth went on to do six months work in America for Darley, one-and-a-half years in Ireland, then three years in England before looking for a new racing challenge.

He got to Sydney in January, 2014, on an assistant trainer’s scholarship and looked to learn under a top trainer for a year before going back to England.

“His (Waller’s) bio was the least descriptive,” Duckworth said.

“I didn’t know him that well but he had won the last few premierships and that’s all I knew so I thought he can’t be too bad.”

He applied to ride work and help out in the office in the afternoons. His work ethic and knowledge of the sport impressed the leading trainer.

Quicker than he thought it would.

“Just before I was due to go home, Chris told me he was thinking of sending me to Royal Ascot with Zoustar,” Duckworth said.

“I said ‘you think or you know, because if I tell my mum that I’m coming home next week with Zoustar she’s going to be over the moon, but if I tell her then it’s not right then I’ll be killed’.

Zoustar went amiss in Europe and didn’t run at Royal Ascot. Duckworth thought he would stay in England.

“I only had a few pairs of shorts and shirts in Australia and it wasn’t worth coming back for them,” he said.

Waller wanted him back, though, and got him a visa. Duckworth then applied for residency and was close to leaving the top trainer.

“I was offered quite a good role with another big stable and I approached Chris about it in
the carpark at Warwick Farm,” Duckworth said.

“He said ‘no one will look after you like I will and if you stick by me, I’ll stick by you’.

“It was amazing to hear.”

Duckworth and Waller have been an unstoppable force all around Australia in recent years and on Saturday at their home track, Rosehill, might have their next Group 1 winner going around.

Cape Breton will run in the opening race for two-year-olds and with his closest rival Volcanic Rock a likely Queensland starter on Saturday, he’s going to start a short-priced favourite.

He won on debut at Canterbury last week and a win on Saturday should book his ticket to the Group 1 JJ Atkins (1600m) in Brisbane, which is always a target race for the stable.

“I’d say it’s hard to look past him as our best chance on the ­day at Rosehill, especially if the Waterhouse/Bott horse is going up to Queensland,” Duckworth said.

“He’s a tough little horse and is also seriously talented.

“The JJ Atkins could be coming around too quickly but Press Statement won it for Chris on the quick back-up.”

The Chris Waller-trained Welsh Legend will run at Rosehill on Saturday. Picture: AAPSource:AAP

The rain has come for Wu Gok as he tries to defend his title in the Listed Winter Cup (2400m). If it gets into the heavy range, he will look to win his ninth race on a worst-rated surface.

“He needs the rain and he’s just been an absolute warrior,” Duckworth said.

“He’s just as well as ever and if the track is wet then there’s no question that he’s the best horse in the race on that type of going.

“He’s rock-hard fit and you need to keep him at a nice cruising speed, you can’t let him go too slow. The older he is the faster you can keep him going.”

Mubariz and Welsh Legend take each other on in the eighth race, when the former ($4) is
favoured to win again under Tommy Berry.

“He’s got an excellent record and everyone had him down early on as a horse that doesn’t like the wet, but he does,” Duckworth said.

“What he doesn’t like is kickback, so the key is he has to get to the outside.

“If he’s stuck on the inside, he just won’t win. That’s why we stuck with a rider who knows the horse and Tommy is getting down to 53.5kg, which suggests he thinks he’s a good winning chance too.”

So why won’t Duckworth go out on his own and become a trainer in his own right?

He’s done the apprenticeship and hard yards, and many in the industry wouldn’t doubt he could do what Annabel Neasham has done and become an immediate success at the highest level.

“Basically it comes down to, am I going to be better than Chris?” Duckworth said.

“That’s the question I ask myself. If I’m not going to be able to beat him, then I don’t really want to do it.

“If I’m just going to be taking part and I can’t beat him, then why am I leaving a job with the largest amount of Group 1-­winning horses in the country?

“It’s like asking someone if they want to be the No.2 driver in the best F1 team or the No.1 driving in a lesser team.

“I just don’t know. Maybe I lack a bit of self-confidence wondering if I’m going to be a great trainer.”

Duckworth said he might have gone out and become a trainer on his own had he not had the job with Waller, who he once copped a pasting off for the way he described him.

“I did an interview for the Racing Post a few years ago and I got a massive spray from Chris afterwards because I said ‘he’s like my Australian father’,” Duckworth said.

“He took enormous offence to that and said I should have called him my brother and not his father because he wasn’t that old.

Duckworth is only 32, which is also in the back of his mind.

“My old boss in England once told me ‘trainers don’t retire, they die, so make sure you don’t start too soon’,” Duckworth said.

Kiwi form could be Oaks Charm

Chris Waller has three runners in ­single figure odds for the Group 1 Queensland Oaks (2400m) on Saturday at Eagle Farm but does not have the market leader.

Bargain ($4.80) and Duais ($5.50), who boast excellent credentials for the big race, are the leading contenders.

“She’s got Group 1 form already, having run second in the Kiwi Oaks.

“It is a pretty even bunch to be fair, but if you’re looking to find an edge to give one over the others it’s probably her or Grace And Harmony, who got a good draw.”

Charms Star, by Per Incanto, came to Australia off a second placing in the Group 1 New Zealand Oaks (2400m).

Only Words is one of Chris Waller’s leading chance in the Queensland Oaks. Picture: Trackside PhotographySource:The Courier-Mail

She comes into Saturday’s race off only one Australian run, in the traditional Oaks lead-up race, The Roses (2000m) at Doomben.

“She’s only a little horse and she didn’t eat that much when she was in Sydney but she’s eating everything up the coast,” Duckworth said.

“I was up there on Tuesday and she just looks outstanding and she’s the one I think that has potentially gone to a whole new level.

“Luke Dittman galloped her and gave her a glowing review.”

Both are coming off wins with Polly Grey shooting for three-straight as a $7 hope but the punters have Nudge ($5) in front of her off a slashing win in a Group 3 event at Doomben a fortnight ago.

“They’re both in form,” Duckworth said.

“I know everyone was a bit rude about Nudge, saying she hadn’t won in more than 500 days but she had been knocking on the door. She was second in a half a million dollar race and she’s the shaper of the two.

“Polly Grey is absolutely airborne. She’s got to come back in distance, which is going to make thing incredibly hard for her.”

Valley called off due to extreme heat 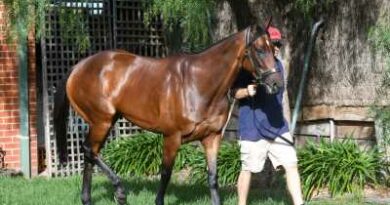 Moroney still learning about Tofane ahead of swansong campaign