Home » MLB » 2018 World Series: Three things the Dodgers need to do to fight back against the Red Sox

Outhit, outpitched, outfielded. In the first two games of the World Series, the Dodgers were no match for the Red Sox, the 108-win powerhouse that roared to the American League pennant, then seized a 2-0 lead in the Fall Classic.

Still, this series is far from over. For one thing, if we use run differential to measure team quality, these two clubs look a lot closer than raw won-lost records would suggest. For another, so far this series we’ve yet to see anything close to the excellent Dodgers team that blazed to the NL West title, then slashed its way to the NL pennant.

In short, the Dodgers still have a pulse in this series. Here’s what they’ll need to do to climb back in it.

Get Walker Buehler’s results to match his stuff

Clayton Kershaw’s nibbling at corners and barely clearing 90 mph. David Price is off about three mph from career-peak velocity. Chris Sale has started to pitch better, but he’s still not the same guy he was before his summer shoulder injury. If you had to pick one starting pitcher on either team who’s currently wielding the nastiest stuff, you could make a great case for Walker Buehler.

The Dodgers right-hander averaged nearly 97 mph on both his fastball and sinker this season. Combine that heat with a plus slider and plus curveball and you have the building blocks for a future ace.

Yet Buehler’s results in this year’s postseason continue to frustrate. In the Oct. 1 tiebreaker game against the Rockies, Buehler was almost literally unhittable. In 6 2/3 innings, the rookie right-hander shut out the Rockies on just one hit, propelling the Dodgers to a mind-boggling sixth straight rate NL West crown. In the three starts since against the Braves and Brewers, Buehler has struck out 22 batters in just 16 2/3 innings, hinting at potential stardom. Problem is, his overall results don’t quite match that bonanza of swings and misses.

Buehler struck out seven and allowed just two hits over five innings in Game 3 of the NLDS. But he came unglued in the second inning of that game, coughing up three walks, a single, and a homer that totaled five runs. Buehler’s eight strikeouts and one walk over seven innings in Game 3 of the NLCS look flashy after the fact, as does the one solitary run he allowed over his first five frames of that game. But three poorly placed pitches over the next two innings resulted in three smashed extra-base hits and three more runs scooting in, netting a loss for L.A. Then in Game 7 of the NLCS, Buehler punched out seven Brewers without allowing a single walk, while generating a healthy 15 percent swinging-strike rate … only to fail to make it out of the fifth inning, after a Lorenzo Cain double and an inviting lefty-on-lefty matchup promoted his manager to go to the pen.

If Buehler can channel all of those swings and misses into the kind of stinginess we saw in the tiebreaker game against Colorado, the Dodgers could jump right back into this series. And if that happens, Buehler would earn a fighting chance for a return engagement later in the series. In Game 7, for all the marbles.

Take advantage of a right-handed starter

The Dodgers were absolute assassins this season against right-handed pitching, leading all of baseball with a terrific .263/.347/.476 line against them, after stripping out pitchers’ hitting (Boston’s hitters were second-best in the majors against righties). They were good, but far less potent against left-handed pitching, with an aggregate line that was 6 percent better than league average on a park-adjusted basis (vs. 24 percent better than average against right-handers).

So while the Dodgers do deploy a phalanx of right-handed hitters as platoon partners, they’re still much happier to see a right-handed starter take the mound against them. Which is exactly what’ll happen in Game 3, with righty Rick Porcello following the Game 1/Game 2 southpaw combo of Chris Sale and David Price.

Muy, muy caliente. With all due respect to David Freese and his fellow righty-swinging platoon mates, the Dodgers are a totally different team with a right-handed pitcher on the mound. Great results tend to follow.

Make it past first base

Through the first two games of the series, the Dodgers have amassed just a single extra-base hit, compared to five for the Red Sox. That’s an anomaly for the Dodgers, considering:

The Dodgers led the majors in slugging against right-handed pitching this season. They face a righty in Game 3 who tied for 10th in the majors for both home runs allowed in 2018, with 27. The top three home-run hitters on the team this year all return to the starting lineup, after taking a seat to begin each of the two previous games. And hell, if you want to use numbers in a cliched way, the Dodgers are also due.

L.A. will take Game 3 by a score of 5-3, thanks to at least two home runs. And we’ll have ourselves a series.

MLBPA director: Teams aren’t even trying to ‘justify the price of a ticket’ 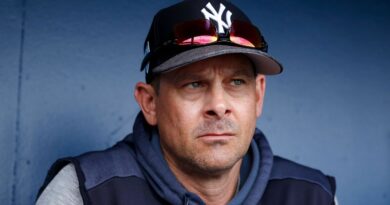 Yankees’ Boone having surgery to get pacemaker