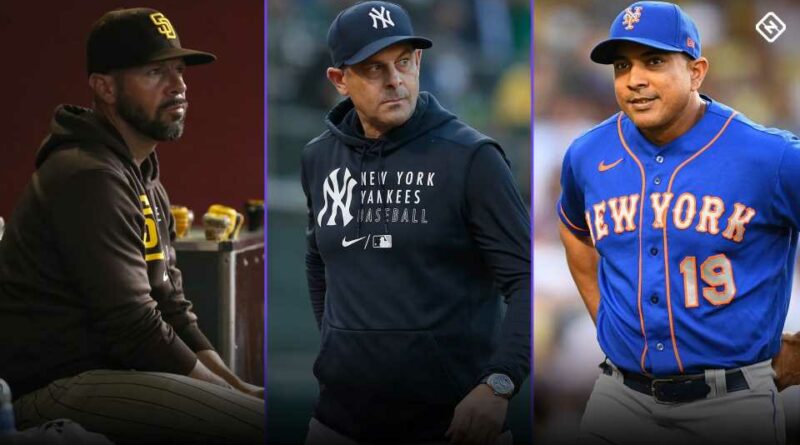 Aaron Boone has been fired by Yankees fans hundreds of times this year, but not yet by GM Brian Cashman, the person with the actual power. Boone’s Yankees have been on quite the roller coaster this season — even by Bronx Zoo standards — one week looking like World Series champs and the next looking like a squad of AAAA pretenders in over their heads.

At the moment, after back-to-back weekend losses to an out-of-contention Cleveland squad by a combined score of 22-4, it’s much more the latter than the former. With less than two weeks left in the regular season and the club currently on the outside looking in at the AL playoff picture, it’s fair to wonder whether Cashman will decide to make a change, either in the waning days of the season or after they’re done playing.

Cashman isn’t the only front-office type with a managerial decision to make soon. We haven’t seen a manager fired this season — Alex Cora, who was re-hired by the Red Sox in November 2020, is the “newest” manager among the 30 in the fraternity — but that feels certain to change in the next couple of weeks.

So let’s look at who might be let go.

Why he’s here: This is Boone’s fourth year as the Yankees skipper, the final season of his original four-year deal. His club made the postseason each of his first three seasons, which is good, but the Yankees have yet to reach the World Series, despite a pair of 100-win seasons. And, yeah, maybe it sounds rough to say “you might get fired because just making the playoffs isn’t enough,” but Boone knew that was the expectation when he was hired.

And if they don’t even make the playoffs, much less miss out on the World Series, that just might be too much. Especially if the Red Sox and Blue Jays — both AL East rivals — take the two AL wild cards (they have those two spots at the moment) and the Yankees are October-less partners with the Orioles in the division.

As is the case with every manager on the list, it’s not solely Boone’s fault that the Yankees have struggled and might miss October. Injuries have played a big role; they’ve played 151 games this year, but only one position player (D.J. LeMahieu) has missed fewer than 14 games. Several of the Yankees hitters — LeMahieu, Gleyber Torres, Brett Gardner, Gio Urshella, to name a few — have performed under established career norms. And the pitching staff? Let’s put it this way: They’ve needed 15 different starting pitchers this season.

Remember how we said this was the final season of Boone’s four-year deal? Have you heard any talk about an extension? Neither have we. Truth is, even if the Yankees manage to reverse their recent slide — they’re 8-15 in their past 23 games — and get to the postseason, anything short of actually reaching the World Series might not be enough.

Why he’s here: It hardly seems possible, but it feels like the Padres’ fall has generated more publicity than the Yankees’ recent tumbles. San Diego was 17 games over .500 after a win on Aug. 10, but after a disastrous 2-8 road trip against the Dodgers, Giants and Cardinals, they’re just three games over .500. The sweep in St. Louis was especially damning, because the Padres went from a half-game back of the Cardinals in the race for the second wild-card spot to 3 1/2 games back, with 13 to play.

And, sure, the Padres have had injuries — especially with their starters — but Tingler, who was never a manager in the minors or majors before he was hired, has seemed over his head.

This was from an excellent piece on the San Diego situation from beat writer Kevin Acee.

The shouting match in the dugout Saturday night between Manny Machado and Fernando Tatis Jr. in itself was not the problem. But it occurring, several people in the organization said, is a product of one of the Padres’ most pressing issues:

Manager Jayce Tingler does not possess the sway to have quashed a situation that had been brewing for weeks.

A similar report surfaced in The Athletic.

But Tingler, the third manager hired by A.J. Preller since Preller became general manager in August 2014, is facing increased scrutiny and second-guessing in his own clubhouse, sources said. In the absence of a firmer hand, others in uniform are stepping forward, trying to keep the team on the right path. The venting Saturday night was one example, and might have played out the same way even if Tingler had not been thrown out of the game.

At this point, it’s hard to imagine Tingler at the helm in 2022.

Why he’s here: Even by Mets standards, this season has been a disaster. In a season when a measly 85 wins might take the division crown, the Mets head into the last couple of weeks not just basically out of contention but multiple games under .500. The Mets were in first place for 114 days this season. They were 48-40 at the All-Star break, and if they’d just played .500 baseball since then, they’d still be a half-game up on Atlanta. But, as you know, the Mets have not played .500 baseball since the break. They’re 12 under since the break.

At this point, we’re compelled to mention the injury to Jacob deGrom — others, too, but mainly the guy with the 1.08 ERA but only 15 starts on the season — and how that’s not the manager’s fault. But there have been so many chaotic-type moments that can be at least tangentially connected back to the concept of a clubhouse that’s neither united nor strong, and that does come back to the manager.

And then there’s this: Rojas was the manager new owner Steve Cohen inherited, and he was only given the job when Carlos Beltran was fired after news broke of his involvement with the Astros’ sign-stealing scandal. It’s not crazy to think that Cohen will want a new manager as part of his second attempt at a fresh start, for the 2022 season.

Why he’s here: From time to time, oddsmakers will send out emails to writers with all kinds of odds — Cy Young favorites, World Series favorites, etc. On Aug. 26, two of those emails popped into my inbox, and both had Montoyo second on the list of managers likely to be fired, behind only Rojas.

It’s safe to say Montoyo will be just fine. We only listed him here to show how quickly things can change with a stretch of wins.

Why he’s here: On a base level, the Phillies have a position player (Bryce Harper) who just might win the NL MVP and a starting pitcher (Zack Wheeler) who leads the majors in innings and is in the thick of the NL Cy Young discussion, but the only reason the Phillies are in contention for the NL East title is because the NL East is so very bad this year.

The Phillies are 76-74 on the season, despite brilliant performances from Harper and Wheeler, and Girardi’s Phillies have laid so many stinkers in games they should have won. Like Monday night; yes, John Means is a very talented pitcher, but getting shut out at home by the 102-loss Orioles in the heat of a playoff race ain’t exactly a good look. Oh, and don’t mention Arizona or Colorado to Phillies fans — or the words “blown save” — unless you’re intentionally trying to ruin their day. And that’s just mean.

It’s only Girardi’s second year as the Philly manager, but the club cut ties with Gabe Kapler after two years because Kapler couldn’t seem to break the hold the .500 mark (they were 161-163), and the Phillies are 104-106 in Girardi’s two years.

No doubt, the 2021 season was disappointing for the Twins, who won the AL Central each of the past two years and were expected to contend with the White Sox for a third consecutive division title. Instead, they’ve been an afterthought since April, when a 2-13 stretch knocked them toward the bottom of the AL Central, and they never dug out of that hole.

Still, firing Baldelli seems rash. The front office has more pressing decisions to handle, such as what to do with oft-injured potential superstar Byron Buxton.

Why he’s here: Maybe the question is this: How bad is too bad? The Diamondbacks were not realistically going to contend this year, and finishing last in the NL West wouldn’t have been a giant surprise. But they’re the first NL team to reach the 100-loss plateau, and they have eight more losses than any other NL squad. At one point this season, they lost 24 consecutive games on the road.

That’s much worse than anyone would have predicted, and that seems like a problem. It’s not that Lovullo is overmatched. Lovullo won the NL Manager of the Year award in 2017, his first at the helm with the Diamondbacks, then won 82 and 85 games in 2018 and 2019, respectively.

L.A. is title town: Dodgers, Lakers are rare feat of consecutive titles for a city