Home » MLB » After trade to Cincinnati and back, Case Williams finding a groove in 2022 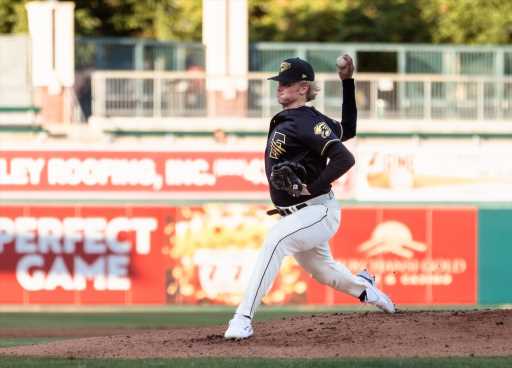 Two summers ago, Case Williams experienced the excitement that comes with being drafted straight out of high school by the hometown club.

But it didn’t take long for that storybook feeling to fade, and for the unpredictable business of baseball to begin.

The Douglas County product was traded to the Reds before even throwing a single pitch for the Rockies organization. Then Bill Schmidt undid ex-GM Jeff Bridich’s trade last summer, bringing Williams back to Colorado in a deadline deal.

“It was a crazy experience,” Williams recalled. “It was a roller-coaster ride, especially coming so early in my career, but it was good for me as a person and as a pitcher. I’m happy to be back with the Rockies.”

Williams is pitching like he’s feeling right at home with Low-A Fresno. After scuttling to a 5.73 ERA in 19 games (17 starts) between the Cincinnati and Colorado organizations last year, he’s found a groove in 2022.

The 20-year-old is 3-1 in eight starts with a 3.50 ERA. Williams has turned in five straight quality starts, including tying a career high with 6 1/3 innings of one-run ball in his outing on Wednesday in Modesto.

Williams said this year’s success is a result of weathering the uncertainty and adversity in the early part of his career.

“Last year was more about survival than anything — learning to survive in the minor league lifestyle and figure out what’s really going on here,” Williams said. “I was still figuring out what worked best for me and my routine. I was able to learn from that, and change to this year where I can really play instead of just getting through it.”

Williams’ arsenal features a fastball (90-94 mph), change-up (82-85), curve (upper 70s) and slider (82-85). If he keeps pitching as he has, a promotion to High-A Spokane this summer is within reason. Rockies farm director Chris Forbes said Williams is “showing a great deal of confidence and conviction in what he is doing right now.”

“I’m getting a lot of swing-and-miss on my slider lately,” Williams said. “But more than anything, I’m learning to adjust more outing-to-outing and pitch-to-pitch, and the mental side has been more consistent this year so far overall. I’m playing to have fun, going out there knowing my stuff plays and I’ve been able to just pitch. A lot of development has happened (since draft day).”

“I wish my dad was here to see it and take part, but I’m also proud of what this day is,” said Hilliard, who was part of the LG4 Day Committee that worked to institute the day. “The Rockies were the first team to back the support of this day, so we helped get the ball rolling and my mom (Tamara Hilliard) worked her butt off. We’re happy we can use this day to help advance the awareness and hopefully raise a lot of money to eventually find a cure for this disease.”

Teams wore a commemorative patch on their uniforms and players could also wear red wristbands with “4-ALS” on them. Gehrig is one of three former players with a dedicated, league-wide day along with Jackie Robinson and Roberto Clemente. Thursday is Hilliard’s first Lou Gehrig Day in the majors, as he was with Triple-A Albuquerque during last year’s honorary day.

June 2 was chosen as the day because it was the day Gehrig became the Yankees’ starting first baseman and began his “Iron Horse” streak, and it was also the day he died from ALS.

Injury updates. Following Wednesday’s doubleheader, the Rockies are a little beat up. Yonathan Daza is still nursing an elbow injury after getting drilled there in Game 1, while Hilliard was evaluated for a concussion and utility man Garrett Hampson is playing through a groin injury. Meanwhile, left fielder Kris Bryant, who went back on the injured list May 25 with a back strain, is throwing and running but has not yet resumed swinging.

With a win on Friday, Kuhl can tie his 2021 win total (5-7) and also tie the most victories he’s had in five years, since when he went 8-11 in 2017. He’s only given up three earned runs through his last two starts, and is 2-1 with a 4.41 ERA at Coors Field this year. Meanwhile, Fried has spun three straight quality starts, including holding the Marlins to one run over six innings in his last outing last week. He’s pitched into at least the sixth inning in all ten of his starts this year. In three career games against Colorado (two starts), Fried is 1-1 with a 4.50 ERA. His last win at Coors Field came April 9, 2019, when he pitched six innings of one-run ball.

Trending: Shortstop Jose Iglesias may be light-hitting (still no homers entering Thursday), but he’s been clutch with runners aboard. Iglesias is batting .472 (17-for-36) with runners in scoring position, the third-highest average in the majors in that stat.

At issue: Colorado’s defense continues to be awful in 2022. After committing four combined errors in Wednesday’s doubleheader, the Rockies lead MLB with 41 total errors.