An Atlanta school that had been named after a Confederate general will be renamed after the late Hall of Famer and former Atlanta Braves slugger Hank Aaron.

The Atlanta Board of Education voted unanimously to change the name of Forrest Hill Academy to the Hank Aaron New Beginnings Academy.

The school had been named after Nathan Bedford Forrest, who was a lieutenant general in the Confederate Army and also became known for being one of the founding figures of the Ku Klux Klan. He eventually became "Grand Wizard" of the organization. 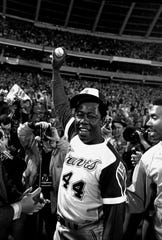 Aaron, who broke Babe Ruth's career record for most home runs and held the mark at 755 until Barry Bonds eclipsed him in 2007, died in January. He was 86.

Aaron played 23 seasons in the major leagues, 21 of them with the Braves franchise — first in Milwaukee, where he made his debut in 1954 and then in Atlanta, from 1966 until 1974. He returned to Milwaukee for his final two seasons, joining the Brewers of the American League before retiring in 1976.

During his playing days, Aaron also faced racist attacks and received letters that used slurs and threatened violence against him. Aaron had said that he kept the letters, despite the pain they caused.

"To remind myself that we are not that far removed from when I was chasing the record," he told USA TODAY Sports in 2014 on the 40th anniversary of his record-breaking homer. "If you think that, you are fooling yourself. A lot of things have happened in this country, but we have so far to go. There's not a whole lot that has changed."

Hi, Orioles fans! It’s OK to believe your team has a shot at the 2020 playoffs