Baseball Hall of Famer Willie McCovey, who hit 521 career home runs and won the 1969 National League MVP award, has died at the age of 80.

McCovey — nicknamed "Stretch" for his lanky 6-foot-4 frame — played 19 of his 22 major-league seasons with the San Francisco Giants, and was one of the franchise's most beloved players.

The team announced McCovey's death Wednesday, saying he "passed away peacefully … after losing his battle with ongoing health issues."

McCovey was an instant hit when he reached the majors as a 21-year-old in 1959 with the Giants, winning the NL rookie of the year award unanimously, despite playing in just 52 games.

In 1962, he and Hall of Fame teammate Willie Mays led the Giants to the World Series against the New York Yankees. However, the Yankees won in seven games, with McCovey lining out to second base for the final out of the series.

He came back the following year and led the league in home runs with 44. That season would be the first of his six seasons as a member of the NL All-Star team.

However, his greatest season came six years later when he won his third home run title with a career-high 45, led the league with 126 RBI and won MVP honors.

McCovey was 42 when he retired in the middle of the 1980 season, capping a career in which he hit .270. His 521 career home runs tied him for eighth all-time with Ted Williams at the time and ranked first among National League left-handed hitters.

McCovey was inducted into the Baseball Hall of Fame in 1986. Even after his retirement, he remained involved with the Giants as one of the franchise's great ambassadors.

His popularity also contributed to legal problems when in 1995, he and former Brooklyn Dodgers outfielder Duke Snider were convicted of tax fraud for failing to report income from autograph signings and memorabilia shows.

McCovey was fined and sentenced to two years probation. However, he was pardoned in January 2017 by President Barack Obama during Obama's final days in office.

When the Giants moved to a new ballpark in the China Basin area in 2000, the body of water beyond the right field wall was renamed McCovey Cove in his honor.

The Giants retired McCovey's number 44 and had a statue of him built at China Basin Park, on the other side of the cove, in 2003.

The team created an award in his honor, the Willie Mac Award, that was given annually to the Giants' most inspirational player, which McCovey presented every year at the beginning of the team's final homestand of the season.

He was on hand at the final series this season to present the 2018 Willie Mac Award to reliever Will Smith.

Upon word of his death Wednesday afternoon, the flags at AT&T Park were lowered to half-staff in McCovey's memory. 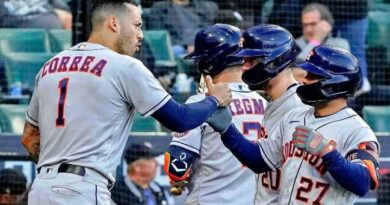