With runners on first and second in the seventh, Anderson jammed Teoscar Hernandez with a two-strike fastball, forcing a pop out, and retired Joe Panik via line out. Anderson worked around a pair of hits the next frame, allowing one run, to set up teammate Peter Fairbanks for his first save of the season.

In limiting damage, Anderson preserved one of the best team pitching performances against the potent Blue Jays in 2020. Toronto averaged more than five runs per game this year before losing 3-1 in Game 1. Tampa Bay starter Blake Snell carried a no-hitter into the sixth inning.

Toronto now faces elimination because its offense disappeared, not because the staff it worried would be insufficient failed to perform.

But the group’s first go at October baseball Tuesday went poorly and, barring a quick turnaround in this best-of-3 series, its postseason debut will be short-lived.

While some Blue Jays fans blamed manager Charlie Montoyo for making too many pitching changes in Game 1, the combination of Matt Shoemaker and four relievers allowed only four hits and kept the contest close. The top four spots in Toronto’s order, meanwhile, struck out eight times and went 1 for 13.

“Being down just 1-0 in the sixth, I will take that every time,” Montoyo said of the pitching effort.

The Rays present a tough obstacle for Blue Jays batters, perhaps jittery on a stage they weren’t supposed to reach so soon. Snell is one of the top left-handed aces in MLB, and projected Game 2 starter Tyler Glasnow can be equally effective at getting hitters to chase pitches out of the strike zone. Tampa Bay’s bullpen is loaded with rocket arms.

Plus, as the No. 8 seed in the AL, it was always going to be a challenge for Toronto to advance.

Worst-case scenario, the Blue Jays’ batch of talented but inexperienced hitters will leave a hectic 2020 having internalized the feeling of being in the playoffs. Regardless of the Game 2 result and a potential Game 3, then, the club can take solace in gaining that mental edge, even if it would be mystifying for its bats to stop producing after being reliable throughout the year. 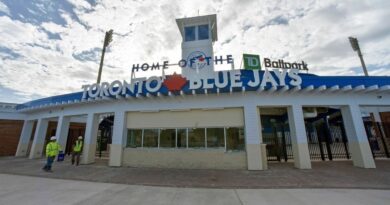