How long has it been since Buffalo last had a big-league baseball game in town? Tuesday, for the first time since 1915 — two global pandemics ago — it is getting another go.

That’s when the Toronto Blue Jays will “host” the Miami Marlins at Sahlen Field, the downtown ballpark that is the Jays’ home away from home during this strange MLB season. The virus that brings them is the same virus that will keep Buffalo baseball fans away. They accept this cruel irony as the price of history.

If you don’t know much about Buffalo, or its baseball background, you’re in luck. We offer here a guide for the uninitiated.

First of all, Buffalo styles itself as the City of Good Neighbors. And what could be more neighborly than offering your minor-league ballpark to a big-league neighbor in need?

Wait, make that neighbour. See? Buffalo is happy to adopt Canadian spellings: That’s why, 50 years ago, Buffalonians named their new hockey team the Sabres, not the Sabers. We aim to please.

In fact, nonstandard spelling of our team names is a Buffalo tradition. That’s why our minor-league baseball team — the Blue Jays’ top farm club — is called the Bisons. Never mind that the plural of bison is bison. Heck, we’ve been calling them the Bisons since 1879, when the original Bisons played in the National League.

That’s right, Buffalo has a major-league pedigree. The Bisons played in the NL from 1879 to 1885. Hall of Famer James “Pud” Galvin, baseball’s first 300-game winner, was their biggest star. (He got the nickname because he made hitters look like pudding.) Buffalo also had major-league teams in the Players League, in 1890, again as the Bisons, and in the Federal League in 1914 (as the Buffeds) and 1915 (as the Buffalo Blues).

So, in the century since the last big-league ballgame in Buffalo, we’ve gone from Blues to Blue Jays. 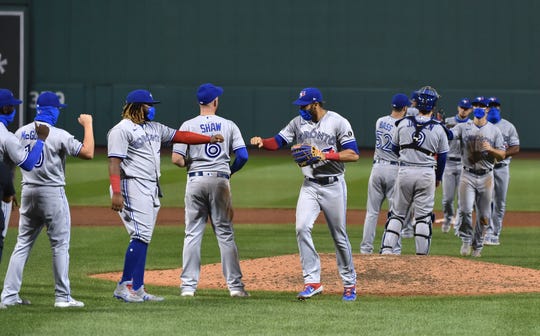 The "Buffalo Blue Jays" will play at Sahlen Field, named for a local meatpacking company that makes hot dogs so good that some Buffalonians choose them over Buffalo wings.

(Important note: No one in Buffalo calls them Buffalo wings; they are, simply, wings. Additional note: Real Buffalonians do not order their wings with ranch dressing; blue cheese, please — as in Blue Jays.)

Buffalonians like to wash down their wings with Labatt beer, which should make the Blue Jays feel right at home. Labatt Brewing Company was the team’s majority owner in the mid-1970s when the Blue Jay name was chosen as an homage to Labatt Blue, the brewer’s flagship brand.

Labatt’s headquarters are in Toronto, and its U.S. headquarters are in Buffalo. The cities are less than 100 miles apart if you’re driving. If you can fly — like, say, a blue jay — it’s more like 60 miles. (Oops, make that 100 kilometers.) That’s because the Queen Elizabeth Way, the road that connects them, bends around Lake Ontario. 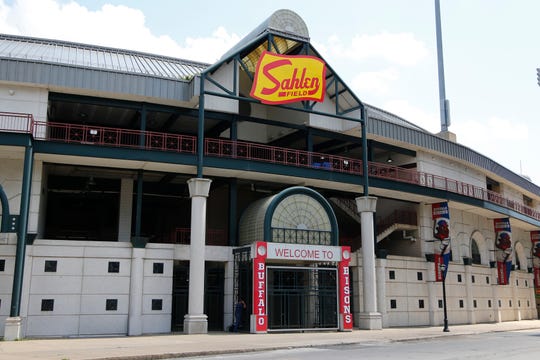 The Toronto Blue Jays will play their 2020 home games at Sahlen Field, the home of their Triple-A affiliate. (Photo: Jeffrey T. Barnes, AP)

Lake Erie is just a few tape-measure Vladimir Guerrero Jr. home run blasts from Sahlen Field. The seagulls that lazily land in the outfield come from Canada, but for the rest of us the border is closed for now.

That’s hard, because Buffalo shares more than a lake and a river with its neighbours to the north (or, in Buffalo’s case, to the west). We share a way of life, at least in several key respects: Buffalonians eat doughnuts from Tim Hortons, and tie their kids’ skates at dawn in cold hockey rinks, and know all the words to “O Canada.”

They’ll play the anthems of both countries before the Blue Jays’ games in Buffalo, but that’s nothing new; it’s already standard at Bisons’ and Sabres’ games, and the same when the NCAA men’s basketball tournament comes to town. One of the nice things about living on the border is you get to feel true patriot love for two countries all at once.

Buffalo’s baseball history is mostly minor league. The Bisons played in the International League from 1912 to 1970, when the franchise moved to Winnipeg, so you could say Canada is paying off an old debt now that the Blue Jays are coming. Another iteration of the Bisons returned in 1979, and has stayed since — first in the Eastern League and then the American Association and now back in the IL.

On their return, in 1979, the Bisons played at War Memorial Stadium, affectionately known as the Old Rockpile. Brock Yates, in Sports Illustrated, wrote in the 1960s that it “looked as if whatever war it was a memorial to had been fought within its confines.”

That was to Buffalo’s benefit when Hollywood, in the 1980s, wanted a ballpark that could pass for the 1930s. That’s how the Old Rockpile got a starring role with Robert Redford in “The Natural.”

So, as it turns out, Buffalo is an old hand at providing ballparks for teams from elsewhere. The New York Knights won a pennant at the Rockpile when Roy Hobbs hit a walk-off home run for the ages that exploded the stadium lights and lit out for the territories.

Might the Buffalo Blue Jays author a Hollywood ending of their own? Sure, they’re an extra-long longshot to win the World Series. But, hey, think of it this way: When the year began, how long were the odds of these Blue Jays finding a summer home in Buffalo?

‘He has a way of making you believe’: How Alex Cora built a championship culture